How will Broncos offense look with Trevor Siemian? 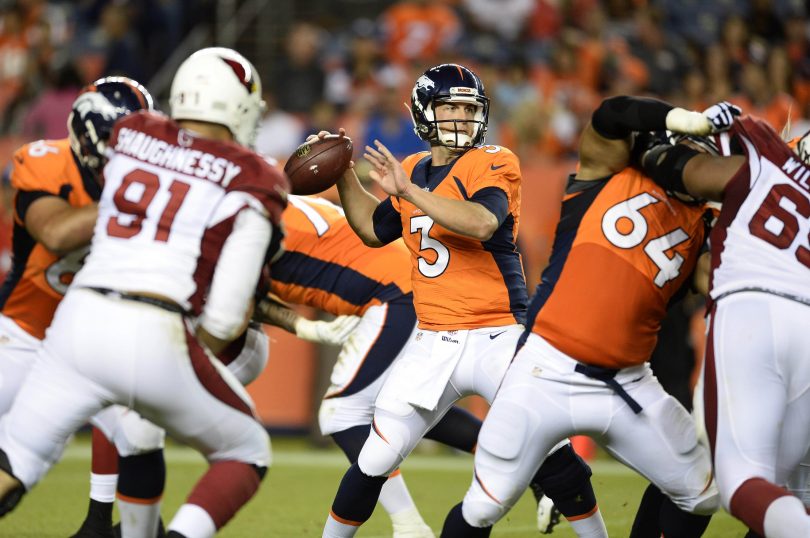 Finally, it looks like one of the most intriguing QB battles in the NFL is coming to a close. Gary Kubiak, head coach of the Denver Broncos, named former seventh-round pick Trevor Simian the starting QB after Denver's third preseason game. While the quarterbacking can't get much worse after playing with a used-car version of Peyton Manning last year, will Siemian flourish or flounder? It's time to take a look and find out.

Siemian played college ball at Northwestern, and was picked up by the Broncos as a seventh-rounder in the 2015 draft. While the Broncos had both Manning and Brock Osweiler ahead of him at the time, the pair left Denver at the end of the year, forcing Siemian into a battle with buttfumbler journeyman Mark Sanchez and 2016 first-rounder Paxton Lynch. Sanchez was favored to begin the year at the start of training camp, but a poor performances by the USC grad and seized opportunities by Siemian flipped the script, allowing the underdog to capture the job. And while Lynch was never expected to start the year, he still looms large in the Broncos' plans. After picking him with their first selection, Denver obviously wants Lynch to become their QB of the future. Siemian has impressed, sure, but he's still little more than a stopgap in the organization's eyes. If Lynch begins next season, great. If he comes on towards the end of this year? Even better, as far as John Elway is concerned.

Speaking of Siemian, the youngster is known for his cannon arm, and his studious attitude. Coming into the year, Broncos Pro Bowl CB Chris Harris Jr. even called out Siemian for his advanced knowledge of the playbook, and tagged him with the "sleeper" label to win the job. However, the prophecy wasn't the reason the unheralded late-rounder rose to the starting job--his decision-making was. Coming into training camp, Siemian had the swagger of an NFL starter but not the supreme selection skills to back it up. He was erratic, inaccurate, and downright strange, often passing up wide-open receivers down the field for surer completions in the flats. But that all changed with hard work and a little luck over the course of the offseason. With him under center, look for Kubiak to run lots of play-action and deep shots--Siemian can make all the throws, and has the newfound mental skills to complete those deep bombs. While the coach's offense has always been predicated around the run and play-action, look for more bootlegs this season: Kubiak had to almost eliminate QB runs from the playbook when he was forced to deal with Manning and Osweiler, neither of whom is particularly mobile. With the younger and more agile Siemian, Kubiak will dust off that section of the playbook in the upcoming season.

Siemian was a long shot to win the job at the start of the year, and came out of nowhere to pull off the unexpected. Thankfully for the Broncos, though, he's got potential, and has impressed throughout the preseason. While he may turn out to be great or a complete bust, the Broncos can take solace in one thing: after last year, there's nowhere to go on offense but up!