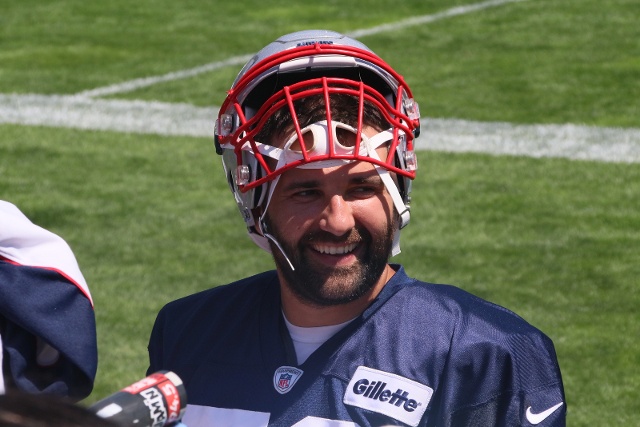 At this point, I'm sure you've heard the news. On Friday, Patriots DE Rob Ninkovich was suspended for the season's first four games after testing positive for a banned substance. However, does it really matter? I would argue no, and here's why.

Ninko said he was "heartbroken" after being suspended and that he's going to work as hard as he can to come back from the suspension a better player. But is it really that bad a thing? Considering that the veteran is 32 years old, and has played 10 seasons in his career, the "forced rest" might help him more than harm him. Without the typical strain of an NFL season on his body, the defensive end could return more refreshed than ever. And while he won't be able to have any contact with the team for the season's first month, he has said he plans to train with Tom Brady and keep in touch with some former teammates for company. Either way though, it's not like the Pats will miss him much. Ninkovich tore his triceps in training camp, meaning he most likely wouldn't return until after his suspension anyways. In the meantime, the team will be able to work in Rams refugee Chris Long and young standout Trey Flowers. Long, after eight years in St. Louis, has proved himself an able edge-setter and pass-rusher, and the former 2015 fourth-rounder Flowers is looking to make his mark in the regular season after a very strong preseason.

Ninkovich has said he was "unaware that something [he] bought had a substance in it that would give [him] a positive test," and that "few things are more important to [him] than [his] name and reputation." While I'm inclined to believe him and his claims about whether or not he knowingly took PEDs, his suspension could be a blessing in disguise for New England. It gives one of their hardest-worked veterans a rest, and simultaneously allows the team to experiment with a new acquisition and promising youngster at the position. Hopefully Ninko returns well-rested and ready to go in Week 5--and perhaps he'll show us that the forced rest wasn't such a bad thing after all.