Ben Roethlisberger out against Patriots with torn meniscus 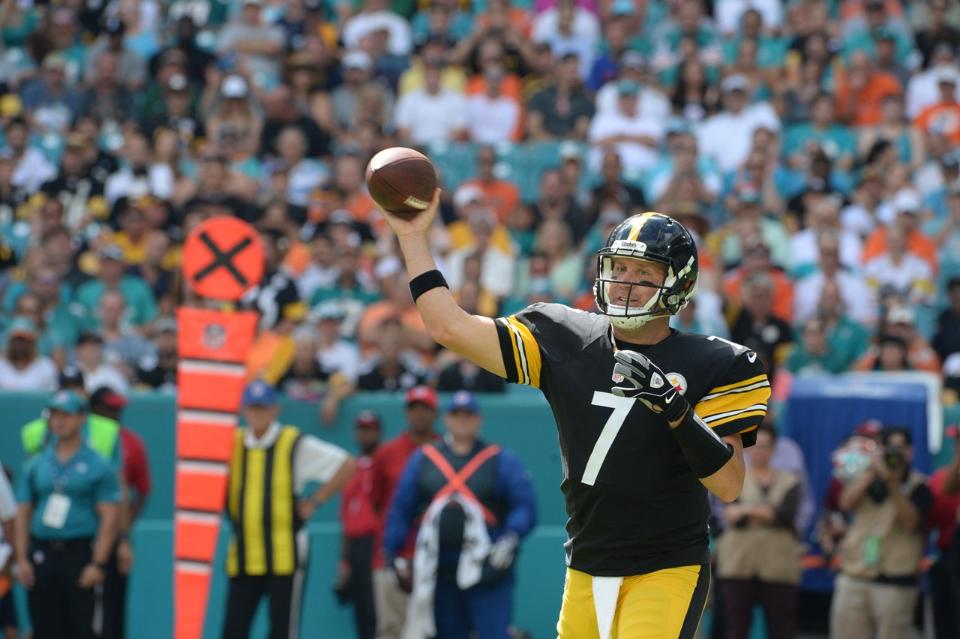 The Steelers suffered a 30-15 loss at the hands of the Dolphins on Sunday, but the bigger loss will haunt them for weeks to come. Though he re-entered and finished the game, quarterback Ben Roethlisberger tore his meniscus and will have surgery. So, what does this mean for Pittsburgh, and how does it effect their upcoming matchup with the Pats?


Steelers quarterback Ben Roethlisberger has a torn meniscus in left knee and will have surgery Monday morning. No timetable for his return.
— Ron Cook (@RonCookPG) October 17, 2016

Landry Jones is expected to start against the Patriots.
— Ron Cook (@RonCookPG) October 17, 2016


The Pittsburgh Post-Gazette's Ron Cook broke the news on Roethlisberger late Sunday night. While, as mentioned, his return timetable is unclear, he's definitely going to be out against New England. It's a big break for the Patriots, who have been hampered by injuries on defense (especially at linebacker) and are looking for a statement win over a marquee Super Bowl contender.

With Roethlisberger, the Steelers loved the deep ball. In smooth route-runner Antonio Brown and speed demon Sammie Coates, they possess the personnel to throw the pigskin all over the yard. Additionally, Roethlisberger was a pro at extending plays out of the pocket, breaking defenses down by simply outlasting them. That all changes with Landry Jones. While the Oklahoma product was effective in relief of Roethlisberger last year, he's only thrown one pass this year and doesn't have the same chemistry with the Steeler wideouts.

Jones' arm is strong, but Roethlisberger had a cannon. Without him, expect the Steelers to throttle down their passing game and get their star runner, Le'Veon Bell, more involved. They know that if they let Tom Brady get rolling they won't be able to stop the avalanche--so their best shot at a victory is to keep it a low-scoring game and grind the clock on the ground. Unlike Roethlisberger, Jones might get one or two deep throws throughout the game, most likely to Antonio Brown. If the Patriots can shut down the Steeler star, they stand a very good chance at winning.

While it's always a shame to see a star get injured, Roethlisberger's torn meniscus is a big help to the Pats in Week 7. Landry Jones, while not disastrous, just isn't the same caliber passer. In light of the injury, expect New England to snag a big road win in Pittsburgh this week.