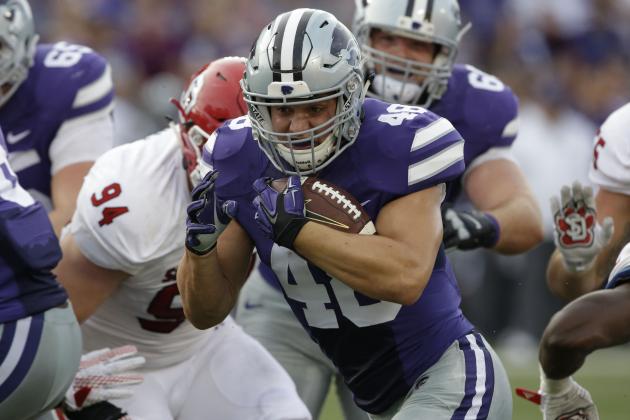 For five games during the 2011 season, Rob Gronkowski united with his brother Dan on the Patriots. Unfortunately, Dan couldn't stick in New England, and the epic Gronk-Gronk pairing was over in a month. After many mock drafters predicted the Pats would draft Gronk's fullback bro Glenn, Rex Ryan crushed New England dreams by picking the Kansas State product in the fifth round. But then, Glenn washed out in Buffalo and Bill Belichick swooped in.

On Saturday, Belichick decided to give the kid a shot, and added him to the Pats' 10-man practice squad. He'd have to be promoted to the 53-man roster to play in games, but still--he's on the team. After he was used as a hybrid blocker, runner, and receiver at K-State, expect for Bill Belichick to get creative with him in New England--for all we know, there could even be some two tight-end pairings with his older brother!

Little Gronk might not see the field immediately, but his future is still bright with the Patriots. As the NFL's premier game planner, Bill Belichick must be thrilled with Glenn's versatility and physicality. So, who knows? Gronk & Gronk, carving up a defense near you. For the first time in years, it could be a reality.