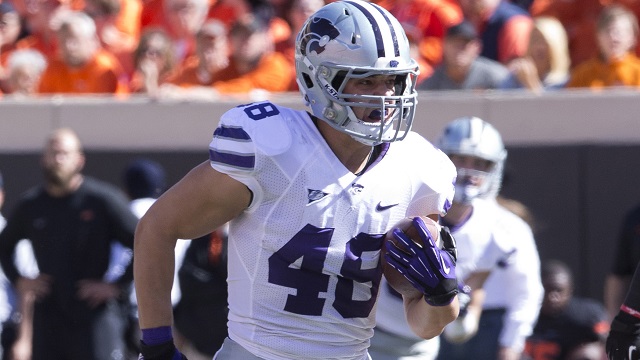 It's not over just yet. The Patriots re-signed fullback Glenn Gronkowski to their practice squad, meaning there's still a chance the elusive Gronk & Gronk duo could actually see the field this year.

The Patriots opened up October by signing the rookie fifth-rounder to their practice squad, then cut him less than two weeks later, on the 11th. It looks like the younger Gronk might be doomed to keep getting added and dropped from the Pats practice squad. While it's not uncommon to see players frequently cut and re-signed, this is getting to be a bit much.

If the younger Gronk is to get in the game, he's most likely going to play fullback in the Patriots' offense. However, New England already has James Develin in that role, meaning Glenn is pretty much an insurance pickup just in case something happens to Develin. That's a shame, because Gronkowski can still play.

At Kansas State, as mentioned previously, Glenn was a hybrid runner, blocker, and receiver with impressive production over four seasons. If he sticks with the Pats, it will be because of that versatility and resilience. Hopefully he has what New England is looking for, so that this Gronk & Gronk pairing can stick around longer than the last one.

Read parts one and two of the Gronk & Gronk saga