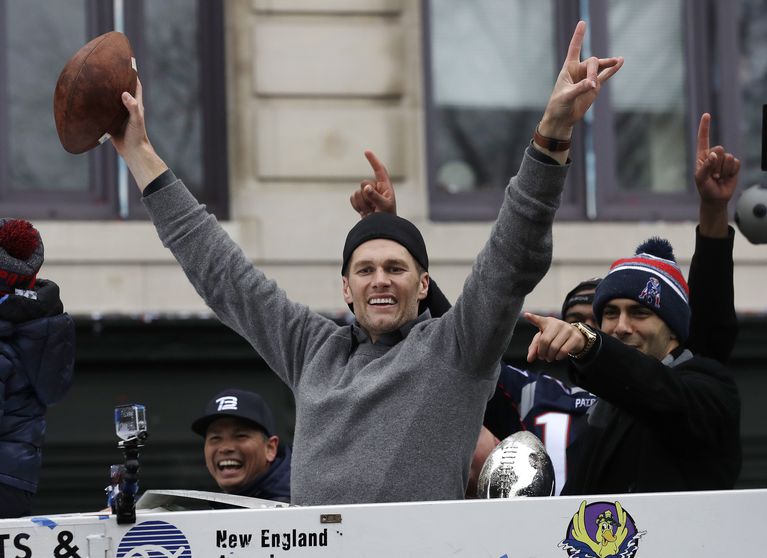 The Patriots held their Super Bowl LI victory parade on Tuesday at 11 AM EST, and it was a great time all around. According to CBS, over a million fans were in attendance to watch Rob Gronkowski & Bro Co. chug some beer and laugh at some 69 jokes, Bill Belichick get excited about working around the clock (as usual), and Tom Brady hold the Lombardi Trophy high from City Hall Plaza. Check out some of the highlights below!

Before the parade even officially started, fans at Copley Square and along the route got the party going:

After that, it only got better. The strict "no alcohol on the parade" order was clearly ignored (what did they expect?):

Tom Brady had a good day, and it looks like his son did as well:

Danny Amendola went all in with the hat (and the fans loved it):


Danny Amemdola and the rest of Patriots are not holding back today pic.twitter.com/XUrhyPWYnt
— Barstool Sports (@barstoolsports) February 7, 2017

The fans got rowdy at City Hall Plaza, the final stop on the parade route:

And to top it all off, Bill Belichick started a "no days off" chant at the end of the parade, with mixed results:


A "No Days Off" chant is the most Belichick thing ever pic.twitter.com/kIUOQKVS4P
— Sports Illustrated (@SInow) February 7, 2017

Sounds like the special teamers took note. As for Gronk...


No days off: @joecardona93 + @R_Allen86 long snapped and punted a football off their float during #patriotsparade! pic.twitter.com/MvdOXhov8T
— New England Patriots (@Patriots) February 7, 2017

It's been a wild ride over the past couple of days for Pats fans everywhere. In true Belichickian fashion, there's a time to soak it in, and a time to get back to work. Today? Let's just say it was a little bit of both--but maybe one more than the other.