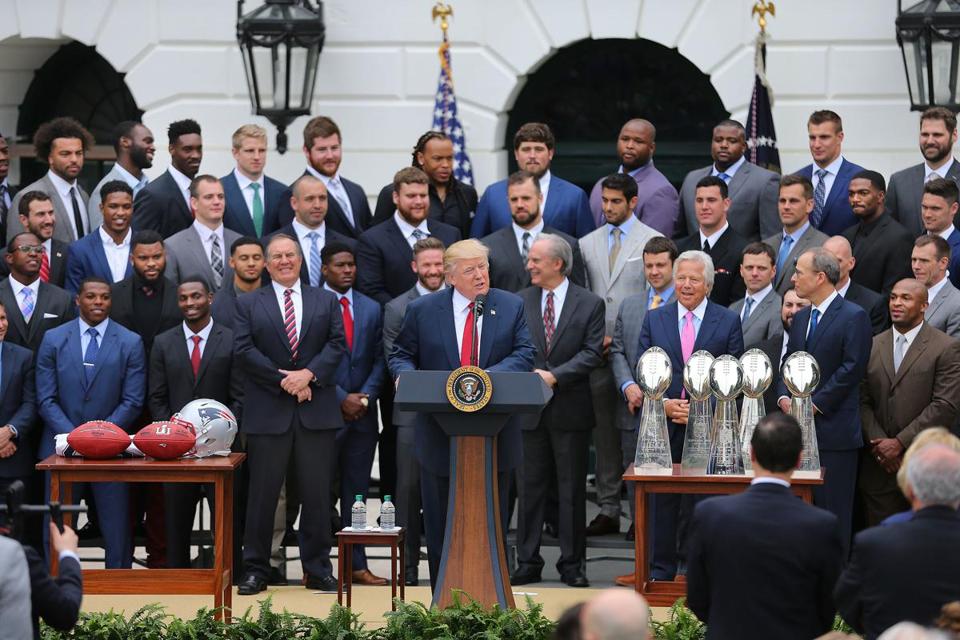 The Patriots made their long-awaited visit to the White House today to celebrate their Super Bowl LI victory, albeit without almost 20 players who declined to attend.

While some news organizations compared photos from last year's visit to this one in order to suggest there was a much lower turnout, they weren't quite true: in 2015, the Pats had over 40 team employees standing on the steps behind the players. This time around, the team opted to seat the personnel on the South Lawn and out of the picture.

Photos on social media appear to show a difference in the New England Patriots' turnout at the White House vs. 2015 https://t.co/cZgEjSCV6J pic.twitter.com/WW5mcd2MWJ

Of the players who declined to attend, many cited family conflicts (like Tom Brady) or simply didn't see the point of going back to the White House after they went just two years ago. However, others turned down the invitation based on the man sending it out: President Donald Trump. Key players like Devin McCourty, Martellus Bennett, Chris Long, Alan Branch, and others were all absent for political reasons.

Of the players who went, it seemed like Gronk had the biggest impact. The fun-loving tight end crashed a White House press briefing, much to the delight of Pats fan and Press Secretary Sean Spicer, and shared a fist bump with President Trump:

Gronk casually walking in on a White House briefing. pic.twitter.com/I3jDzsojJr

Overall, it looked like the visit went well for most everybody involved. But while it may have been fun to take a trip to Washington DC, it's back to work now for all the Patriots staff. With the draft just a week away and offseason OTAs on the horizon, it's going to be a busy couple of weeks for the coaches and front office.