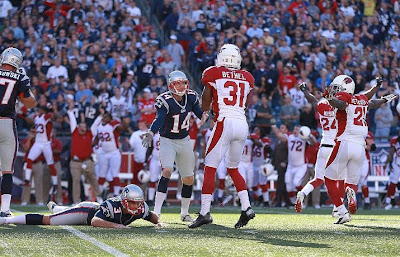 Stephen Gostkowski shanked a 42-yard field goal with one second left, and the New England Patriots lost to the Arizona Cardinals 20-18.

It is the Patriots' first home opener loss at Gillette Stadium and first since the final game of the Drew Bledsoe era, in 2001, at Foxboro Stadium against the Jets.

The Patriot' offense was woeful for much of the afternoon. Gostkowski, who hit four field goals including two from beyond 50 yards, didn't come close on his last-second field goal attempt as it went sailing wide left. Gostkowski has yet to prove his worth in big moments. The kicker has never hit a field goal when trailing in crunch time.

Besides four field goals, a five-yard pass from Tom Brady to Rob Gronkowski was the only scoring for the Patriots. Brady threw for 316 yards as New England fell to 1-1 in the season. Jay Feely hit two field goals for Arizona, who improves to 2-0, and Andre Roberts and Kevin Kolb scored the Cardinals' touchdowns on the day.

Takeaways from the game

The offensive line had a horrible day, letting pressure get to Brady most of the day. Brady was sacked four times and Ryan Wendell, the center out of Fresno State who made the team over Dan Koppen, missed blocks and couldn't pick up defenders. At one point in the first half, he went to double-team an Arizona defensive lineman who had already been blocked to the ground, leaving Brady helpless as the pocket collapsed.

Josh McDaniels' poor play calling scarred the game. He didn't trust Brady to throw the ball on a third down and six in Arizona territory, instead opting to call a toss to Stevan Ridley on the right side who was swarmed by Arizona defenders and tackled for a loss. On a third and one in the fourth, McDaniels was at it again, calling a slow-developing run to the right that ended in negative yardage. After the Patriots cut the deficit to two, McDaniels called another slow-developing play on the two-point conversion that ended with an incompletion. After after a fumble sent from Heaven, McDaniels was too conservative in his play calls in the final minute, opting to have Tom Brady lie on the ball instead of running up the middle to make it an easier field goal attempt.

So far this season, Gisele Bundchen has been right. Between Brandon Lloyd dropping a fourth quarter third down pass that hit him in the chest and would have gone for a first down, to Gronkowski dropping a touchdown in the fourth and not taking an extra step on a long ball from Brady in the first half, it's been frustrating to watch the receiving corps. Wes Welker, who had a good day, catching five balls for 95 yards, still shows signs of stone hands. He has trouble catching the ball on any pass play that's not over the middle of the field. That is not saying Brady had a perfect day, either. The deep pass to Gronk wasn't a perfect throw, but the dropped passes are getting old. Although Aaron Hernandez left the game early with a leg injury, there is no excuse for the offense not to be on the same page.

The Patriots would've won the game if the replacement referees didn't catch a cheap holding against Gronkowski that took away Danny Woodhead's game-winning touchdown in the final minute. Although the offense took way too long to get going, they still went on a comeback that fell just short. The defense had another good day. This team shouldn't have to rely on its defense, but with the offense struggling, it did today. Although the defense had a few lapses and mental blunders, they forced a huge fumble late in the game to give the offense a chance to win the game.