The Patriots set out last season to improve the return game by signing track and field runner Jeff Demps, but Demps’ future in a Patriot uniform seems to be running out. Demps, who was a guest on Sports Talk Florida, made it quite clear that he was willing to leave the Patriots if the team and Belichick didn’t meet his demands. 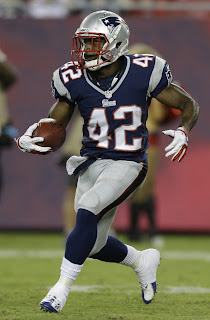 Just what are his demands? Demps wants to participate in track still and if he does so would miss about 5 games of the upcoming season. In August of last year, the Patriots signed Demps to a 3-year deal worth about 1.45 million dollars and two weeks after that deal he was put on injured reserved. Host of the show David Baumann asked Demps how he would “sell his plan to Belichick?” to which Demps responded “if not, I guess I’ll just focus on running.”

With the recent signing of Leon Washington, I say let him walk. Demps’ heart is obviously not in football and more so into track. Having someone that is focused on multiple sports seldom works because a full off-season of training helps develop teamwork and sharpens your skills. Football is not like track because you have to develop an ability to read blockers and kick coverage from the opposing team. It’s not something that translates in other words.

Why should the Patriots have to be without someone for five games out of the season? This isn’t basketball or baseball. Five games is nearly one-third of an NFL season. He may have world-class speed, but as far as I’m concerned, he can’t get out of New England fast enough.