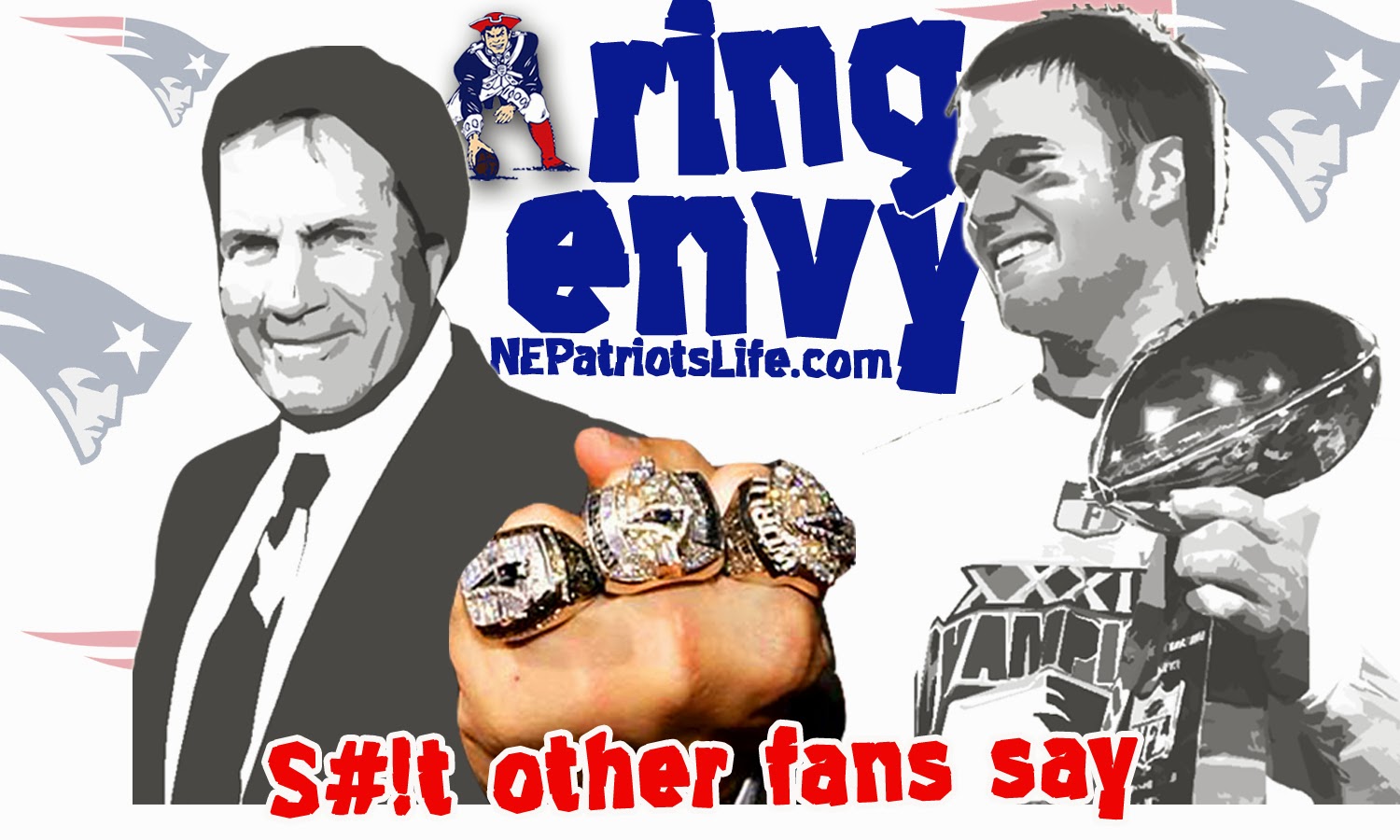 Holy crap was that a lot of comments. When you have a big game, you have a lot of conversation. When you have a game where a team blows a 24 point lead and heads into overtime, you have even more. Normally we have these up the day of the game, but this one was just too massive. Broncos fans seemed to half expect the comeback, saying numerous times that you can't count Tom Brady out. By the end of it, they were all cursing Manning and wishing Brady was on their side. Couldn't draw up a more perfect game, or a more perfect Ring Envy

Wow We got Rid of TEBOW for this hahhahhahahha

And so the attempt at the "Choke of the season" begins.

Man, can you guys imagine if we had Brady as our QB with this offense? Oh man. Drooling...

I envy the Pats for having Brady right now. We have a two-faced QB who can't handle the environments. I mean no disrespect to Manning, he is the GOAT in warm weather.

It's becoming pretty clear who the better quarterback is. And it's not all that close.

This answers the question for me Brady or Manning, clearly its Brady.

Wow, under these conditions, it will be a very long and difficult game tonight....

Great tackle, NBC should offer the ability to mute Collinsworthless, I would pay $5.99 for that ability

brady is a much better QB than tackler.

Something tells me no more Ridley. Hope he comes back though haha.

Nice fumble but kind of lucky, if Woodyard doesn't hit the ball with his helmet, I think Ridley breaks the tackle.

Overall defense needs to do better.Pats were moving on us.

Up 2 TD's and Manning hasn't even warmed up!

Moreno. TD. The patsies are toast.

Do it again D, another TO to stomp on their throats. A 14 point lead is nothing against this team.

This couldn't have gone better if I scripted it.

I hope they have Chris Collinsworth on "Suicide Watch".

Send in the National Guard.

I just hope Peyton doesn't get too cold from sitting on the bench.

WOW holy WOW if this is Broncos ball

DUKE!!! Who used the hit stick on their playstation???

What's extra sweet about these events, is DEN is creating these turnovers. NO cheapies. We flat out knocked the ball out 3 times.

This.. is how you beat New England!

Its the beginnings of a route!!!!

Broncos defense: "Manning, you can take the night off, we'll take over tonight."

LOL game over. You have two offensive units out there tonight. Congrats on the win.

even the play clock is frozen

right now, all you can hear in the crowd is "where did we pahk da cah?"

Seriously!! Not even a throw into the End Zone?
Anybody who thinks that 17 points can't disappear in short order against New England, is living in Dreamland.

I hope they keep piling it on, I saw this Pats team come back 30 pts down to the 49ers last year and almost won. I don't want that kind of stress.

How cold is it? So cold time has stopped.

Who would of thought we would be ahead 17-0 with almost the 1st qtr over and have -2 yards passing!!!!

Well something is up with Manning. He looks about as comfortable as a lamb in a wolf's den.

Darn almost had another fumble!

Pats offense back on the field. You know what that means: turnover!

i wanna stampede these guys

Peyton really does hate the cold

Hear that loud NE crowd? Neither can I.

Who has a better night, Tom Brady or Brock Osweiler?

Boy, if our D can get another TO, it would really put a dagger in. Shut everyone up. They all said we were soft. How's this for being soft now.

Not the first time Brady has been sandwiched between two men. (Not judging here)

We are THE DENVER BRONCOS

Hey, where those pasties fans at?!

Decker drops it, looks for flag.

Great, so all that cost us DRC

Really cromartie .. You hurt yourself going for an int to add to your stats ., smh

As long as we don't put Welker back for returns lol.

Is it too early to pick out a victory Scotch to have tonight? got a sampler i am drooling over

Gronk is a giant....we need Jack the slayer.

And here comes the Brady comeback.

anyone thinking this game was over at halftime just got a wake-up slap.

No problem. We still have this game in hand.

Nah. It's still over.

Clearly Brady doesn't have trouble throwing in the cold.. Time for manning to prove he doesn't either or this game will turn real quick .

I'm turning this game off.

just when you think ball is coming around...literally giving them back the game.

And so the attempt at the "Choke of the season" begins.

Why do we keep going back to these butterfinger RB?

We would screw this game up

Okay, time to find out if Peyton is a situational QB. If Brady can throw it around in the cold, there is no excuse for Peyton against a banged up defense.

this is why you don't call plays like you are up 40 with 5 minutes left int he 4th quarter. just because the running game is working doesn't mean you don't take shots. especially with peyton manning

If we lose this game we deserve a wildcard. This is garbage now.

Wondering when one of our WRs is going to step up and actually make a damn play. DBs get physical and they just wilt....

Dang. They need to throw more, the Pats're cheating to the run.

Why do we keep running the ball when we have the wind?.... WTH is manning doing?

Peyton is failing bad, anybody that cares to disagree is a homer.

So did our defense stay in the locker room or something?! What the heck?!

OMG, this is ridiculous! What the heck is our D doing.

Brady is throwing into the wind in the same weather and tearing this defense a new one.

Complete failure. No way this team wins in the playoffs.

Well this started because someone wanted to pad their stats.... I'm looking at you DRC

I envy the Pats for having Brady right now. We have a two-faced QB who can't handle the environments. I mean no disrespect to Manning, he is the GOAT in warm weather.

WOW!!!
This is going to look really good on Brady's "Manning vs. Brady" resume, as it's pretty clear which direction this game is going.

I'm turning this off and going to pray

I can not believe this game is going the way we all kno is going to happen!!! Brady comes Back from 24-0 wins ESPN Sucks him off for the next 2 weeks

Brady is still a punk.

Wow, this collapse may be more epic than the Charger collapse last year. Not only are we tanking, but we're losing everyone possible while doing it.

We can't stop Brady, and our offense looks like crap vs the injury PATs Defense

We almost never beat the Pats. It wasn't in the cards to begin with, at least we had a nice first half.

Gooooo manning I still have faith!!!

So, even if we were to get to the Super Bowl, who believes Peyton can play in New Jersey in the cold.

And then, Manning CHOKES.

We could completely switch teams, and the Pats would still beat us. We just can't beat them.

Peyton Manning seriously needs to learn how to play under pressure and in the cold end of story. So sick of watching him play like crap when the chips are down.

We choked is an understatment

New England has 3rd string CB's out there and Manning us scared to through on em... Wow

Peyton CANNOT play! This is ridiculous. Put Brock in!
Sick of this untouchable pedestal.

It's becoming pretty clear who the better quarterback is. And it's not all that close.

Funny story... I am watching the game right now.

Wow We got Rid of TEBOW for this hahhahhahahha

I'm so upset right now. I can't believe what we are letting the Pats do to us right now.

This answers the question for me Brady or Manning, clearly its Brady.

We are done. The season is over as well. Glad I went to last weeks game.

I've tried to deny it, but now I see it's true - PFM, can't play in the cold and chokes in big games. I'm calling it a night - done with this crap!

Brady is putting on a clinic on how to win a game.

Lol I wouldn't be upset if they pulled manning to be honest, that's bad I know

Jesus guys, down by a TD with well over 7 minutes left and y'all are throwing your QB and your team under the bus.

There is that classic Welker drop lol

Little surprised we got the call. But yeah that was blatant.

Sick to my stomache...

What the hell kind of throw was that? A 10 yard hail mary?

Don't like to see people hurt, but I hope Talib is out for the rest of the game

Sigh, can we please have a running back who DOES NOt FUMBLE.

Man, can you guys imagine if we had Brady as our QB with this offense? Oh man. Drooling...

what a crappy way to end a game.

this hurts so much.

This team is too stupid to go anywhere