The book sat on my kitchen table for upwards of a week.

Every time I trudged into the kitchen to relieve the refrigerator of some of it's burden, it was there beckoning me to open it, to flip past the inside flap that told of New England Patriots' legendary left guard John "Hog" Hannah's struggle not only with the injuries that ultimately ended his career, but also with his bloated self image... 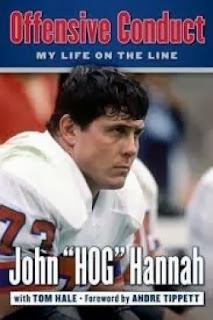 ...an image that Hannah recants with sored detail in his self-depreciating autobiography, Offensive Conduct: My Life On The Line (2013 Triumph Books) - a book that remained unopened as I wrestled with my own emotions.

Even before the book arrived from the publisher, I was experiencing an absurd amount anxiety and the resultant trepidation that accompanies change - in this case a change in perception.   Fans want their boyhood heroes to be larger than life, and the risk that comes from having too much knowledge of that hero is a risk that I wasn't sure I was willing to take.

John Hannah was one of my boyhood heroes, a larger than life avatar that represented the Patriots' teams that were my first introduction to the game of professional football - the images burned on my brain of him absolutely obliterating defensive tackles, opening huge holes for the likes of Sam "Bam" Cunningham and providing pocket protection for quarterback Steve Grogan.

So to read the inside flap and to realize that the book was named what it was not for his life on the offensive line of the Patriots, rather, for his offensive behavior toward anyone and everyone in his quest to become the best lineman to ever play the game, I had serious doubts that I wanted to read the book at all.

But after a week of giving the glossy cover the same uncertain pondering look that one craving a bowl of cereal would a carton of milk that had recently expired, I threw caution to wind and opened it up, hoping it wasn't rancid, at least not to the point that it would overwhelm my boyhood perceptions...

...hoping against hope that Hannah told a tale of dominating his opponent, providing some insight as to what drives a person to be the best, the inner workings of the Patriots organization and his motivations and his mentors - of his highs in victory and his abyss-like lows after a loss.

Because in our boyhood imaginations, our heroes go to the finest restaurants and dine on prime rib and cheesecake after a big win, enjoying the finest of wines and toasting their greatness - all on the restaurant owner's dime, of course - before repairing to the splendor of their large, comfortable digs on the good side of the tracks where a hot tub awaited to soothe their bumps and bruises of glory.

Conversely, we want them to feel as bad as we do when they lose: the image being a dimly lit hubble on the wrong side of the tracks - arriving home under the envelope of darkness, the stealth and loneliness far better than enduring the stares of their shamed neighbors - peanut butter and jelly sandwiches on stale bread for dinner and hopefully not the expired milk to wash it down with, bags of frozen peas across each knee to reduce the swelling...

...and the book didn't dispel that notion, but did lend a realistic element to my fantasy - and by the time I had reached the end of the book, I was quite sure that the reality was somewhere in between my delusional fairy tale and his revalation, and was certain that peanut butter and jelly wasn't the worst thing he ever had for dinner.

The Forward to the book - written by Hannah's teammate and fellow Hall of Famer Andre Tippett - spoke volumes all on it's own, and set the proper mood for ensuing 220 pages, Tippett telling of his first training camp, about how Hannah's reputation preceded him and the respect he commanded through the fear his presence provoked...

...but the one thing that catches the eye and lent the proper perspective to what Hannah wants us to believe about him was Tippett's statement about being on the team for four years before Hannah ever acknowledged his existence verbally - giving the reader a baseline from which to proceed as to how Hannah perceived his status in the world during his playing days.

Yes, he does buy into the notion that he is the best that there has ever been, but that's not what this story is about.

His tale is one of being victimized - Exploited for his trusting nature, fleeced in contact negotiations, oppressed by maniacal authority figures, beaten emotionally and physically, giving credence to his assertion throughout the book that the impostor that he claimed to be was borne out of disappointment and despair.

Mostly however, victimized by his own frail constitution - the bully inside of him growing larger with each incident, grasping and desperately holding onto each victory, no matter how small, eventually unable to control his ego like he controlled everything and everyone else...

...his bloated sense of self-admiration spilling out of the helmet that was so starkly and prominently featured on the cover of Sports Illustrated that he references so often throughout the book that it's as if it were a badge of shame.

The best there had ever been at his position on the football field was a walking Lifetime Channel movie off of it - and when his knees and shoulders couldn't bear even one more play and he hadn't a face mask to hide behind any longer, well, that's when his life became really interesting.

Hannah ably articulates the many events that led to his eventual downfall - and in true redemption and born again form managed to leave that life behind, but like with any addiction, his need to wield control became the toughest opponent he had ever faced - the specifics of which lending itself to an insightful read.

The man that had been such an integral influence on my love of the game of football wasn't perfect after all, as his book goes out of it's way to promote - but there's nothing wrong with finally realizing that your boyhood hero is human...

...and the book does this in such a way that if it were that expired carton of milk in the fridge, you'll be glad that you decided to pick it up and take a big swig out of it.