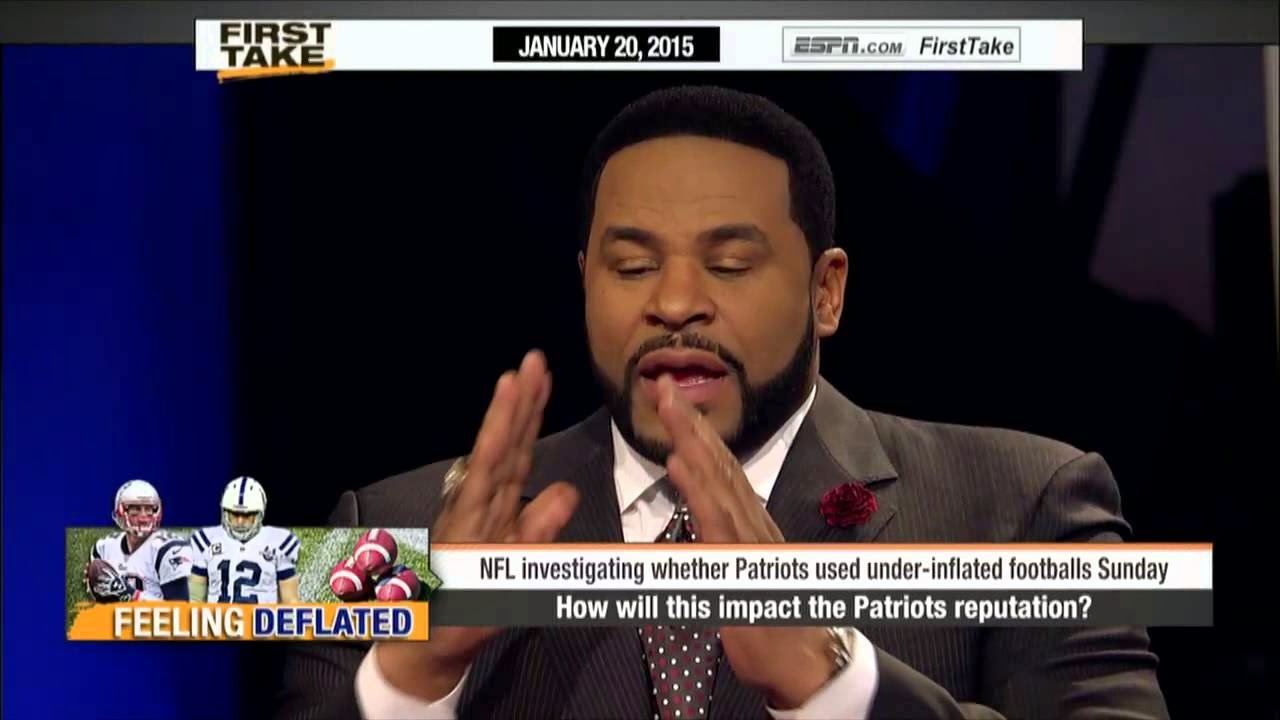 This should be made aware to everyone and anyone who did not know that this exists: ESPN hates the New England Patriots. Often times it is subtle, with reporters and hosts not giving them the credit they deserve or throwing small jabs at their failures. But then there is what they've done this week.

Earlier this week, Pardon the Interruption's Michael Wilbon had the balls to say this:

“The Patriots franchise is on probation as far as I’m concerned, from Spygate,” Wilbon said on Monday’s show [Pardon the Interruption], according to NESN.com. “If you’re a cheater, and you’re a multiple time cheater, I would say to the New England Patriots, ‘You know what we’re going to do? If this is found to be true, like today, tomorrow, the next 72 hours, the next three days, you know what? You’re forfeiting your spot in the Super Bowl. We’re vacating it. Get out! You’re a cheater, you’re a lying franchise.’"


Even though it has been widely accepted that this game would've been won by the Patriots even if they scored zero points with the deflated footballs, and also had that the best record in the NFL, Wilbon still said this nonsense. But this is ESPN. Logic can't prevail here.

The biggest crime that ESPN committed though, was following their coverage of the Tom Brady press conference. They went to their NFL Live crew consisting of Trey Wingo, Mark Brunell, Jerome Bettis, and Brian Dawkins. Trey Wingo asked them for their reactions about Brady's press conference, and insanity ensued.

Mark Brunell called Tom Brady a liar, and said that what he did was disgraceful and wrong. He got so emotional that he was moved to tears.

Do people still remember who Mark Brunell was? Not really? Well that's ok, he hasn't really been relevant in the last five years. The one thing to note is that dear old Mark played for the New York Jets as a backup quarterback in his last two years in the NFL (2010, 2011).

You don't think he has any animosity towards the Patriots? None at all? Chalk up one individual who has a reason to hate the Patriots.

"I did not believe what Tom (Brady) had to say" - Mark Brunell on NFL LIVE now pic.twitter.com/4wdMiMIMej
— Pro Football on ESPN (@ESPNNFL) January 22, 2015

Onto the second panelist: Jerome Bettis. He also called Tom Brady a liar. Claiming he did not believe anything that Tom Brady said, Bettis blabbered on about how wrong this was.

Jerome Bettis can't have reasons to hate Tom right? Well not unless you count him as a former St. Louis Ram, and Pittsburgh Steeler. One who personally lost to the Patriots in an AFC Title game.

Now that wouldn't make anyone mad right? Chalk up a second person that despises the Patriots.

As for the third? That would be former Broncos and Eagles safety Brian Dawkins. He expanded upon the points that Brunell and Bettis voiced. He believed Brady lied and cannot be trusted.

So that makes three of three panelists that have obvious reasons to harbor hatred towards the team they are covering at the moment.

Not one of these former players provided any facts, proof, or evidence. They simply spoke out of assumptions, speculation, and unbridled hatred. For being the worldwide leader in sports, it is depressing to see them fail to provide unbiased coverage of a news story, but what else is new.

Notice how Tedy Bruschi and Damien Woody aren't involved with any of the Deflate Gate coverage. Wonder why that is? Could they possibly speak first hand about what happens when Brady goes to check footballs, or if he has told them anything about the process? They probably could, or at least they could defend the honor that ESPN is stripping away from Brady and Belichick. But that would make too much sense for ESPN.

They also decided to interview Serena Williams about Deflate Gate. Why would they ask a tennis player about this? Maybe because she is a minority owner of the Miami Dolphins. No reason to dislike the Patriots there.

After their pieces bashing the Patriots further, they showed their national poll asking if people believed what Brady and Belichick said today. 83.1% of the country said they believed them. Yet nearly 100% of ESPN people don't believe a word they said.

Where else can ESPN show their bias? Their gameday panel consists of a coach who coached against the Patriots in a Super Bowl, a former Jet, a former Bronco, and Ray Lewis who has been adamant about his dislike of the Patriots. That seems about right.

You cannot tell me that there is nothing to this. Watching this network for the entirety of my life, I cannot count the number of times they have bashed, discredited, made fun of, accused, and just simply hated on the Patriots.

This article may forever keep me from being able to be hired in any capacity by ESPN, but I'm ok with that. I don't want to be associated with an immoral and biased organization of their ilk.