NFL owners are not all in on DeFlateGate 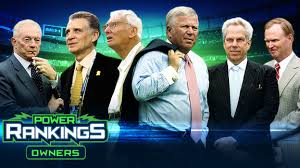 Per a league source, a sense has emerged among some owners that it’s time to put the football-inflation imbroglio in the rear-view mirror. It already has marred a Super Bowl and hovered over an entire offseason; it now threatens to be one of the major story lines throughout the 2015 season.

The DeFlategGate saga moves into its eighth month. NFL owners relied on New England Patriots owner Bob Kraft to settle the 2011 lockout. Players may have moved hastily in settling their financial differences. The NFL owners still retained control, and DeFlateGate is proof positive of that. "The NFL wants to run its business the way the NFL see fit, with no third parties having the ability to dictate to folks who are accustomed, based on their extreme wealth and influence, to doing the dictating."

Judge Richard Berman may be deciding on more than the PSI level in footballs. He could be setting the stage for a real lockout at the next collective bargaining agreement and court ordered mediation. The current agreement runs through 2020. 43 year old New England Patriots QB Tom Brady may still be waiting the appeal on his four game suspension.

Old school owners are not used to losing any power to the players. The newer owners appear to be more interested in those big paychecks that the league hands out each season. Bob Kraft ought to remind a few of the oldtimers that a settlement is more important than winning. Third party visitors will only uncover more discrepancies, and create more Ted Wells reports. No owner would vote for that.

The decision by NFL owners on deciding which two teams will play in Los Angeles should be a piece of cake.


Paul Murphy is a freelance writer from New Hampshire. .