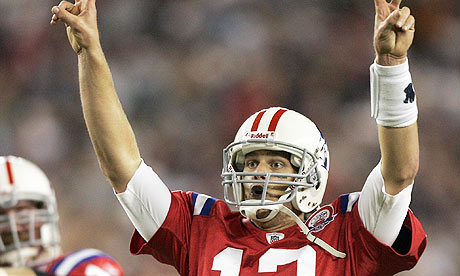 In honor of the Patriots' Monday Night Football match up with the Buffalo Bills in a few days, let's take a trip back to 2009.

However, this game was one of the bright spots of that season. This was Brady's first game back from the ACL injury that sidelined him for the entire 2008 season - the last time the Patriots and Buffalo Bills met on Monday Night Football at Gillette Stadium.

The season opener for both squads came with tons of hype because of Brady's return. But it didn't start off that well for the Pats.

New England began the game with the ball and couldn't convert on a 4th and 1 run by Laurence Maroney, giving the Bills the ball at their 40-yard line.

Buffalo jumped out to a 7-0 lead late in the opening quarter when Bills quarterback Trent Edwards hit receiver Shawn Nelson for an 11-yard touchdown. This came after Stephen Gostkowski missed a 41-yard field goal that set the Bills up at their 32-yard line.

After the teams traded punts, the Patriots tied it up with a Fred Taylor touchdown run. Brady looked like he was starting to get into a rhythm on that drive, as he hit Wes Welker for a couple of short passes that gained them over 10 yards each, found Randy Moss for a 16-yard pass, as well as Kevin Faulk for a short 13-yard pass.

Whatever rhythm Brady seemed to be in didn't last. On the next Patriots possession, Brady was intercepted by Aaron Schobel, who took the ball back 26 yards for a touchdown to give Buffalo a 14-10 lead.

The Pats answered with a field goal just as the second quarter was coming to a close to make it 14-10, but you could sense Buffalo was getting ready to really make their mark.

It wouldn't happen right away, though. The Bills punted on their first possession of the second half. This gave the Pats a chance to either get within one point or take the lead. They did neither. Brady orchestrated a 13-play, 61-yard drive that once again saw New England turn the ball over on a botched fourth down play. In Buffalo territory already, Brady tried to find Welker for a two-yard play, but they couldn't connect.

Off the turnover on downs, Buffalo extended their lead with a field goal to make it 17-10.

Some may not remember Terrell Owens' very brief stint with the Bills, but on a 3rd and 1 from the Buffalo 45, Owens hauled in a pass that resulted in a 27-yard gain. That was the 184th consecutive game that he'd caught at least one pass. It was his 952nd reception, good for sixth all time at that point.

The Pats answered with a Gostkowski field goal to cut the lead to four. They had some help from the Buffalo defense on this drive. On a 2nd and 3 from their own 30-yard line, Brady found Benjamin Watson (remember that name for later) for 10 yards, which ultimately turned into a 25-yard play after Bills safety Donte Whitner was called for unnecessary roughness.

But then things looked like they were going downhill really fast for the home team. In just over six minutes, Buffalo hung a touchdown on the Pats defense with a little over five minutes left to go, making it 24-13. Field goals weren't going to cut it anymore, and the Patriots were going to seemingly need a miracle to win this one.

It was totally understandable to doubt Brady in his first game back, seeing as how he didn't look like the Brady that Patriots fans were so accustomed to seeing.

In 3:26, Brady led New England 80 yards for a touchdown, finding Watson for 19 yards. They tried to go for two points, with Brady again looking for Watson but they failed to convert. 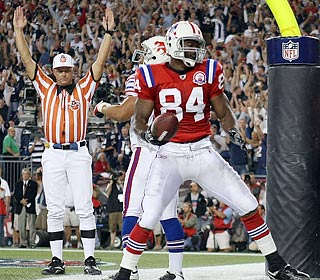 The Pats were going to need a huge stop from their defense to get Brady the ball back, as there was only 2:06 left on the clock at this point. But it turns out that the defense didn't really have to do anything at all. In fact, they didn't even see the field until there were 50 seconds left.

On the ensuing kickoff, Leodis McKelvin returned the ball 31 yards to the Buffalo 33-yard line. It looked like he was going down cleanly, but he coughed up the football and Pierre Woods recovered it to set the Pats up in Buffalo territory with what seemed like three hours for Brady to dig deep and pull this off.

It took just three plays, and again Brady found Watson for the go-ahead score with 55 seconds to go. Since that time, the Patriots have had some really improbable comebacks. At the time, this was one of the most unlikely and satisfying ones to watch given what he went through the year prior.

25-24 final. Bedlam at Gillette. Brady was at his best when it was absolutely necessary, just like he almost always was and still is.