As the free agency period approaches, the Patriots will certainly be examining the market for potential fits to fill voids on their team. One area that struggled in particular down the stretch was the running game, which was downright anemic by the time Dion Lewis and LeGarrette Blount were lost to season ending injuries.

One intriguing name who could draw interest from the Patriots this off-season is Jets power-back Chris Ivory, who led the AFC in rushing this season and was fifth overall in the NFL in total yardage. With 1,070 yards, Ivory finished behind only Adrian Peterson, Doug Martin, Todd Gurley, and Darren McFadden for total yards rushing. 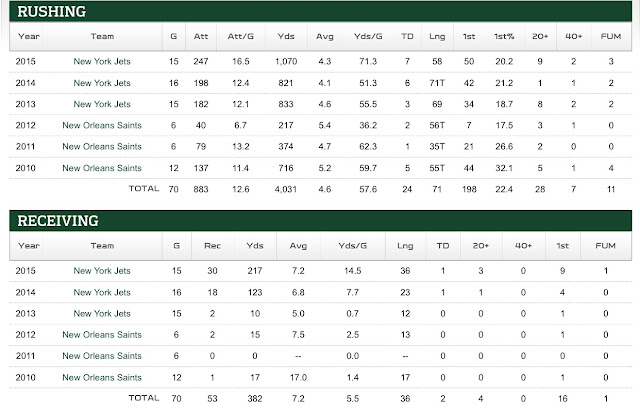 Evaluation: Ivory has shown consistent improvement in each season as a pro, with 2015 being his most productive year, averaging over 4 yards per carry and anchoring the Jet's stout running game. He also earned his first Pro Bowl nomination. He is a powerful, violent runner who fits a similar mold as LeGarrette Blount but would likely be an upgrade over LeGarrette, who did not have his best year this past season, though he was operating behind a shaky offensive line which proved to be the downfall of the 2015 Patriots in their AFC Championship loss to the Broncos.

The big question with Ivory, like all free agents, is how much money he expects to command. He has reached an age where running backs begin to decline and he will certainly looking to cash in on the biggest contract of his career before he does begin to slow down. Whether the Jets value Ivory's contribution to the team enough to pony up the contract Ivory will be seeking will be interesting to see, and I view them as the leading candidate to sign Ivory.

Potential Patriot? Rich Cimini of ESPN.com discusses the fact that due to a relativley weak free agent market at the running back position, Ivory will have many interested teams after him, and he names the Patriots as one of them:

Ivory will have suitors because, other than Doug Martin and Lamar Miller, there aren't many quality backs on the market. It wouldn't be a surprise if the New England Patriots, Dallas Cowboys and Houston Texans show interest. Seeing Ivory go to the Patriots, who need a power back to replace LeGarrette Blount (free agent), would be a nightmare for the Jets.

In my opinion, I don't see the Patriots breaking the bank for Ivory, and see the much more likely being a scenario of re-signing LeGarrette Blount, who despite an off year, has a proven track record of success with the team. It will certainly be interesting to see where Ivory lands.