Chris Long turned down more money to sign with the Patriots 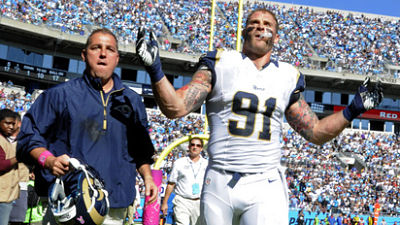 Chris Long hasn't even played a snap for the Patriots yet and already I'm falling in love with the guy. According to his father and Hall of Famer, Howie Long, Chris left money on the table to sign with New England.

“It’s taken a lot longer than maybe I would have thought, but a Long in a Patriots uniform would look pretty good,” the elder Long said, via Mike Reiss of ESPN.com. “I’ve always felt like, in my mind, the way they play, prepare, and go about their business on a day-in, day-out basis, that Chris is a Patriots-type player.

“I think it’s a good marriage, I really do. It’s an exciting opportunity for Chris.”

"I know he could have gotten more money in other places,” Howie said of his son. “He probably would have been slotted right off the bat, but you go there for less money and you go there knowing you have to earn everything you get, and he’s excited about that opportunity with that one goal in mind — having the opportunity to be there at the end and playing relevant games and having a shot at a championship.

“As a former player, those are the games that mean something and for me, being part of a world championship team is special and something you never forget. …He hasn’t played in meaningful games [at the end of the year].”


Besides his father, there are many others close to Chris who think he'll be an excellent fit with the Pats. Some of his former coaches believe Long will be the ultimate professional.

“The structure of [the Patriots] is based on players who are passionate about football and competition and winning,” Groh said. “They are intense about preparation, and at the same time, they value guys who are good teammates.

“Every team that’s Chris has been on -- high school, college and pro -- that’s Chris Long. He’s passionate about football and winning, and he loves competition. He prepares relentlessly. Everybody who has ever played with or coached Chris said that they have never had a better teammate.


“There were moments in high school where he just took over the game,” Blake recalled. “He played both ways. On the offensive line, we just ran behind him and he just cleared everybody out. There were a few times I can recall walking off the field after games and turning to one of my assistants and saying, ‘He’s going to be a pro. He’s a pro.’ "

“I know there were times in high school where it was hard for him because everyone knew who his father was,” Blake said of Long, who finished his high school career with 43 sacks and 66 tackles for loss and a state championship as a senior. “I can remember having those conversations with him, and saying, ‘People can say those things all they want, but you still have to prove yourself.’ I think there were times in the back of his head where he was fighting to prove himself, but I think in the end he figured it out and came to terms with it.

“And I mean, what a resource for him. How many kids can lean on a Hall of Fame dad to figure out how to do your job? The fact is that if you want to play football, you have to figure out how to get past it. Now, if anyone thinks Chris Long is in the NFL just because his dad is Howie Long, they’re crazy. He was a football player coming out of the womb. He’s lived the game his whole life.”

“There’s no holes there,” Rams coach Jeff Fisher said of Long’s game when asked about him at the owners’ meetings earlier this month. “He’s great. Really consistent day in and day out over the years. Loved to come to work, always had a great attitude, playful, jokes around and does it the right way, works hard.”

Chris signed a one-year deal worth $2.35 million and at 30 years old, it's the perfect kind of "show me" deal. If he has a productive season, he'd likely cash in on a more lucrative deal next offseason, whether that's with New England or someone else.