Nate Washington hopes his past will help his future with Patriots 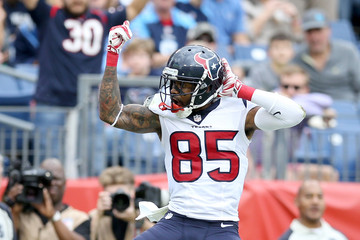 When veteran wide receiver Nate Washington signed with the Patriots in late March, he did so knowing he'd have a chance at winning a Super Bowl. He has never played with a quarterback as good as Tom Brady (although he did play with Ben Roethlisberger for three years), so he should feel much more comfortable in New England than he did in Tennessee or Houston.

Because he is used to playing with average to below average quarterbacks and has still had success, he's hoping that translates into bigger things with the Patriots.

"It forced me to perfect myself in order to help the man behind the center,” Washington said Tuesday. “I think it’s been a [tough] task, obviously, to not have that opportunity, but it’s also perfected me making sure I’m taking care of my business and not looking at someone else’s action… it’s such a requirement to make me the best I can be and give him an opportunity to look to me if need be."


Washington isn't a lock to make the team - he'll have to earn a spot in training camp. But being a great route runner, that should help his case. Washington knows he's going to be pushed to be at his best, too. After he signed with New England, he called former Patriots defensive lineman Willie McGinest for some advice.