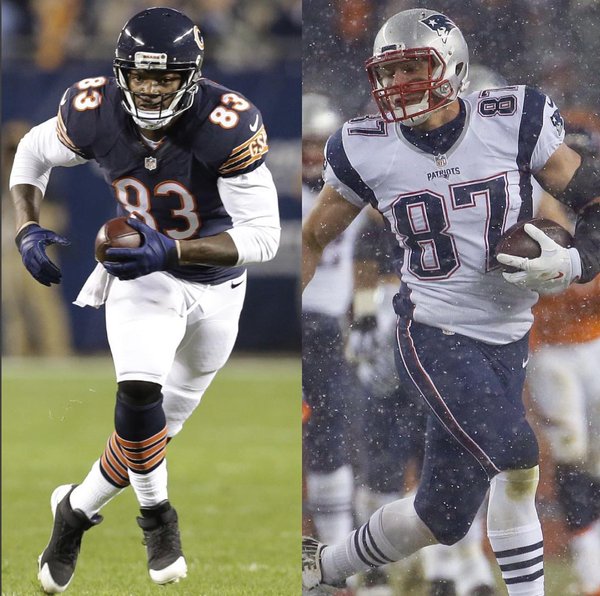 The Patriots have arguably the best two-tight end threat in the NFL with Rob Gronkowski and Martellus Bennett. Bennett, who was acquired in March from the Chicago Bears, is slated to be the No. 2 tight end behind Gronk. That's something Bennett doesn't seem to mind.

"I'm super excited about it because it takes a little pressure off of me too," Bennett said. "I really don't mind being Robin, you know? So right now it's just working every day and just trying to get better. He's an excellent player, and I'm gonna be able to get a lot of single coverages with him."


We won't get a look at Bennett in game action until the preseason, but going off of what we know from OTAs, his size and athleticism is going to be huge for New England during the season. It's not yet known what exactly his assignments will be, but Bennett says he's happy with the way the coaching staff has been using him and are letting him do things that he hasn't been able to before.

"I don't really know what my role is in the offense just yet because there's a lot of things that they're finding out that I can do that people haven't let me do in the past which has been very, very exciting," Bennett said. "They let me . . . They're expanding, and they're just saying, 'Let's see if you can do it. Can he do this? Can he do that?' It's like finally getting the leashes off and letting me go."


Getting back to Bennett playing with Gronk for a second, Bennett believes he and Gronk will be a very successful tandem.

"Rob is awesome. I love being with him in the meeting rooms and talking to him about football," Bennett said. "We've been coaching each other up, teaching each other. I saw Brandon [Marshall] and Alshon [Jeffery] work together a lot, like how they pushed each other to become better. I saw [Terrell Owens] with Miles Austin early on in his career. So for me I kind of take that saw approach with Rob. It's just like two guys, two bros, just trying to push each other to get better."


Bennett has been known to be a bit of a head case during his career, so it's great to see his Patriots career get off to a good start.