Can Pats Defense step up in Brady's absence? 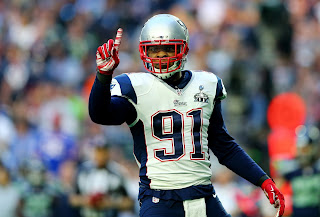 With yesterday's gut-punching news surrounding Tom Brady's appeal to Federal court being rejected, the reality of playing four games in this upcoming football season with someone other than Brady at quarterback is looking more and more likely.

While this makes some folks deservedly shift their focus to a guy like Jimmy Garropolo, or to a lesser extent, Jacoby Brissett, we should all be looking at the Patriots defense to step up and hold the fort until Brady’s return.
Over the past three to four seasons Patriots Nation has seen their favorite team’s defense go through an evident youth movement.

Veteran leaders retired, traded, or released have been replaced by shiny new toys. The nucleus now existing of 3rd and 4th year linebackers Jamie Collins and Dont’a Hightower as well as safety Devin McCourty has shaped the Patriots defense into one of the best units in the league.
While there will be many critics, fans, analysts, and networks alike that are unsure of the Patriots chances without Brady I think it’s important to point out what I believe to be the two greatest examples of the team being able to manage without Brady.

First and foremost, looking back to the 2008 season when Patriot Killer and then Chiefs safety Bernard Pollard ended Brady’s season ended in the first quarter of the season. Matt Cassel, who just can’t seem to keep a starting job in this league helped the team accrue 11 wins that season. The defense was chalked full of veterans at almost every position. Richard Seymour, Tedy Bruschi, the late Junior Seau, and Rodney Harrison were just a few of those names. To make some of those reading this article feel old, this was Jerod Mayo’s rookie year. From a “fleet of foot” perspective, not even comparable to the likes of players on that side of the ball today and that unit managed to finish 8th in points against and 10th in yards against. With any sort of luck, the Patriots would have been back in the playoffs, however due to tie-breaking circumstances they became just the second team in NFL history at 11-5 not to make the playoffs.

Secondly, the last game the Patriots played is a great example of how the defensive unit can lead this team even when Brady is in the lineup. While there should be no fingers pointed at Brady here, (he was the leading rusher and leading passer) he was totally ineffective as the offensive line looked like revolving doors with those orange crush jerseys’ lined up flying through and the team’s crippled offence from injuries built up over the season. It was the defense that pulled the team through that game. The unit held Denver’s offence to 244 yards and forcing a fumble. The Broncos defense won that game and a key stat was them holding the Pats to 2-15 on third downs. However, the Patriots defense nearly went shot for shot causing Denver’s offence to 6-17 on those same third down scenarios. When the Pats needed it most, in an AFC Championship game where the offence just couldn’t get going, the defense was exactly where it needed to be.

On top of the fact that the Patriots still remain one of, if not the best coached teams in the league, these two instances furthermore lead me to a much more comfortable feeling than the world falling apart without Tom being under center. With veteran players like the ever under-appreciated Rob Ninkovich and Patrick Chung, to role players like Duron Harmon and youngsters such as Malcolm Brown and Malcolm Butler the Patriots defense is as complete as it has been in recent years and primed to survive the start of the season while Brady is gone.