Tom Brady is looking for a late 4th quarter touchdown 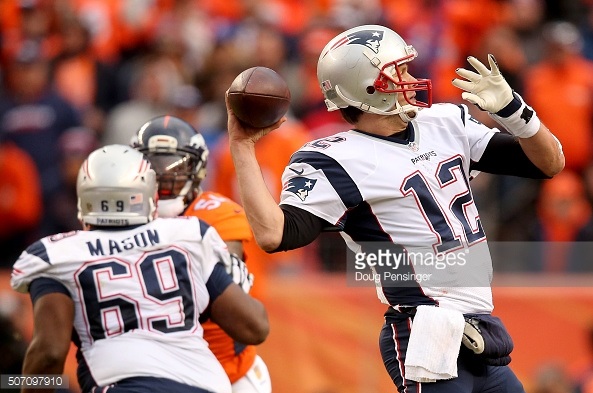 Yesterday morning at 9:28 a.m. a brief message, barely over two lines in length appeared on the docket for the Second Circuit Court of Appeals, a message that rocked Patriots Nation to the core:

Five hundred and forty-eight days after the Baltimore Colts accused the New England Patriots of deflating footballs, in a very brief, non descript document, the Second Circuit deflated the hopes of many who had been on edge for the last seven weeks waiting for a positive response to Tom Brady and the NFLPA’s en banc, or full panel appeal.

Throughout the day various media sources weighed in on Brady’s remaining options and chances of success. Reports varied widely depending on focus, so here’s what must take place in order for Brady to possibly play the first four games of the season. The most essential focus right now is that a stay must be requested of the court.

Procedure dictates that the Brady legal team must first file a stay with the Second Circuit court within seven days of the denial; otherwise the court order will be mandated and irreversible. The Court would then act upon the request, presumably denying, since the same judges that denied the en banc petition would be reviewing.

Next Brady would then petition the Supreme Court for a stay, which would nullify his suspension until a writ of certiorari has been filed and decided upon.

Case law has established four general criteria that the applicant normally must satisfy in order for the Court to grant a stay. They are:

1. that there is a “reasonable probability” that four Justices will grant certiorari, or agree to review the merits of the case;


2. that there is a “fair prospect” that a majority of the Court will conclude upon review that the decision below on the merits was  erroneous;


3. that irreparable harm will result from the denial of the stay;


4. finally, in a close case, the Circuit Justice may find it appropriate to balance the equities, by exploring the relative harms to the applicant and respondent, as well as the interests of the public at large.

Because Ruth Bader Ginsberg is the justice assigned to the Second Circuit, she is positioned to act as a surrogate of the Court, and grant temporary relief. It is likely that Brady’s request will go straight to her. Daniel Wallach, a noted sports law and gaming attorney with considerable appellate experience elaborated on this: “It all rises and falls with the notorious RBG," he said, “and I believe it will be her decision and hers alone. . .as to whether Tom Brady is able to play games one through four.” He continued, “I believe that she is going to side with Brady because there are two elements here that need to be demonstrated before Justice Ginsberg. One is that there is irreparable harm associated with missing four games. . .once those games are lost no subsequent court ruling can ever place Brady in the position that he was previously.  He needs to convince Justice Ginsberg that he has a chance of succeeding before the Supreme Court, so there are two elements that he has to show – irreparable harm and that he has a shot at winning. And I believe that the element of harm is so strong that she’s going to do a balancing act. . and end up ruling in the favor of Tom Brady.”

Regarding the merits of the case, law professor and legal analyst for Sports Illustrated, and noted Deflategate expert, Michael McCann, outlines some of the criteria that Justice Ginsburg will be weighing: “Brady can contend that Goodell’s alleged errors while serving as arbitrator were so damning that absent Supreme Court intervention, Americans would lose faith in the system of arbitration if an arbitrator’s decision can contradict evidence and yet be insulated from judicial scrutiny.”

I also wrote about this in a recent article, detailing the amicus briefs submitted in the Brady case. In this piece, I spoke with David Evans, a respected arbitrator on the panels of organizations that include the Court of Arbitration for Sport, the CPR Panel of Distinguished Neutrals, the American Arbitration Association and the International Centre for Dispute Resolution. Evans asserted “We’ve gone from the Ideal Gas Law to a less than ideal arbitration.” These arguments are reiterated by Theodore Olson, Ken Feinberg, numerous labor law professors and even the AFL/CIO. It will now be the job of Brady’s legal team to convince Justice Ginsburg that the decision of the Second Circuit is less about a football dispute than a rendering of a collective bargaining agreement that allowed an employer to run amuk; thus the precedent of the Second Circuit could potentially harm thousands of union workers who are bound in collective bargaining agreements and also bound to an arbitration process.

As Michael McCann noted, “Justice Ginsburg will be aware that these arguments have resonated with at least two federal judges—Judges Berman and Katzmann—a pattern that helps to legitimize them.”

Asking SCOTUS for a stay is a much different process than petitioning an en banc hearing or requesting a writ of certiorari from the Supreme Court. Typically less than one percent of en banc requests are granted from the Second Circuit, thus Brady was facing overwhelming odds here. Even the most optimistic predictions topped out at only about a thirty percent chance. The Supreme Court receives approximately 7,000 - 8000 petitions for a writ of certiorari each Term, granting and hearing oral arguments in only about 80 cases.

In the case of a stay, should Brady and his team convince Ginsburg of irreparable harm, according to Daniel Wallach, the odds move up to around forty to fifty percent. “How do you get around the irreparable harm issue?” he proposed.

The Supreme Court is now in Summer recess and will not convene again until October, well after the NFL season begins, so it is likely that Brady’s fate will be in Justice Ginsburg’s hands alone. Wallach feels that this is a good position for Brady. “He only has to convince one person and that person happens to be a very liberal judge who is a strong proponent of women’s rights, individual rights, and presumably the rights of organized labor, and he couldn’t be in better hands.”

So I propose that we leave things on a high note for now. There will be much time for speculation in the future, and I’ll be writing more on the process in upcoming articles. But for the time being, let it be on the record, that I believe Tom Brady has a very good chance of playing the entire season.