A couple of key Patriots left practice today with injuries 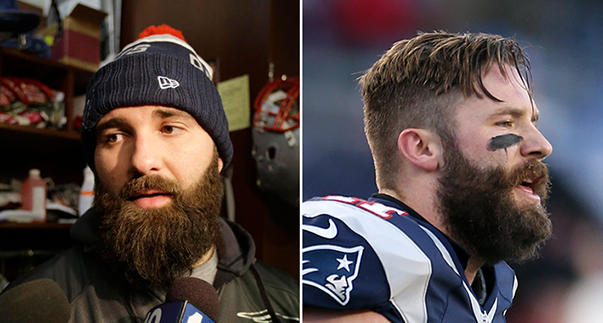 Julian Edelman and Rob Ninkovich suffered seemingly serious injuries just an hour apart, making every Patriots fan heart drop down to their feet. Edelman, who broke his foot back in week 9 against the Giants, awkwardly limped off the field and flung his helmet down on the ground very similarly to the way he did when he first broke his foot. After he was looked at by the training staff for about 10 minutes, he walked away to the locker room under his own power, which was the best possible sight to see for New Englanders. Upon further examination and tests, many sources have confirmed that JE11's injury was simply a scare, and if he misses any time at all, it's just a precaution. *Blows huge sigh of relief*.

However, while Edelman won't be missing any time, the same can't be said for Mr. Ironman himself, Rob Ninkovich. The man who hasn't missed a game in over 6 seasons will more than likely have to sit out at least the first game with a torn tricep muscle. While it sounds horrific at first sight, it's not as bad as it may appear. According to RapSheet on Twitter, there's no surgery needed, and his timetable is "weeks, not months".

With #Patriots LB Rob Ninkovich tearing just his tricep muscle, no surgery is necessary. Rehab. If all goes well, he could return by Oct
— Ian Rapoport (@RapSheet) August 9, 2016


Now I don't know about you, but my confidence level is extremely high when it comes to Ninko getting back on the field sooner than October, but maybe that's just my mindless hope talking. In any case, these two injuries to Edelman and Ninkovich could have been a lot worse than they were, so count your blessings tonight Patriots Nation, the Revenge Tour Part II is still chugging along at full speed.