Ebner getting back in shape after Olympics 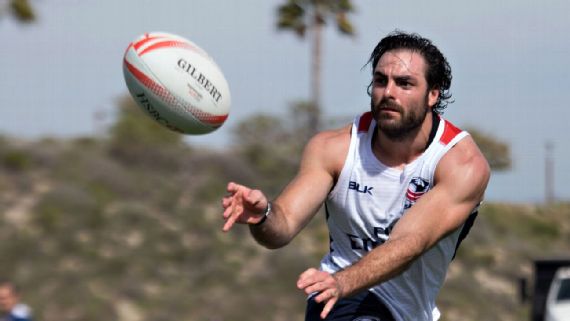 After fulfilling out his dream of playing in the Olympics for the USA Rugby Sevens team, who were unlucky to be eliminated early in the competition, Nate Ebner got back to the grind for the New England Patriots.

The Pats safety has a long way to go to get back on the team but the special teams stud has the commitment to do so. He had to put all that effort to get on the USA Sevens team and so equally Ebner will have the motivation to get back to his best level of performance for the Pats. This will take a long time because he has been out of the game for eight or nine months he has to acclimatize to wearing a helmet again.

Ebner told USA Today reporter Maureen Mullen what the process will be like to get in shape to play football again:


"When my neck muscles get acclimated to wearing a helmet the whole time I think I'll be good to go," Ebner told USA Today. "Probably gain a little bit of weight. But I'm just going to take it one day at a time. I'm not worried about things physically being a big problem."
"Not a ton (of weight), not as much as you would think," he explained. "We had weeks where we were running between 20 and 30 miles in practice. So, yeah, you're going to lose some weight."

What an achievement for Ebner to be able to say he has won a SuperBowl with the New England Patriots and represented his country in the Olympics but now it's back to the day job Nate.