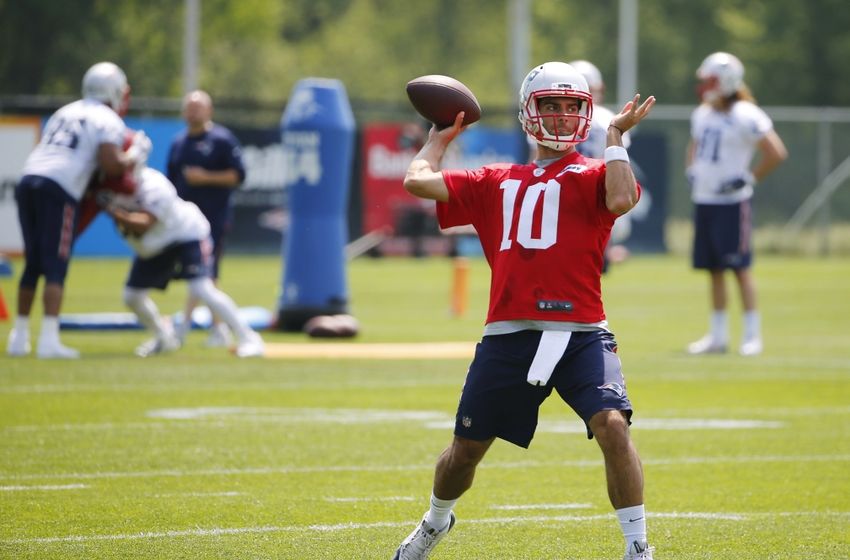 The opening week of 2016 training camp is now in the history books and Patriots third-year quarterback Jimmy Garoppolo has made positive progress working in the Pats system. Now he looks ahead to the toughest stretch of his short career thus far.

Although, in the last few days he has started to go off the boil by slipping back into the habits that haunted at the same time a year ago. In particular, he has moved through his reads to slow, too many poor decisions with the ball and a few wild throws.

The disappointing and slightly worrying thing at the moment is that during team scrimmage on Sunday, he had arguably the best pass catchers on his team in Rob Gronkowski, Martellus Bennett and Chris Hogan (Julian Edelman wasn't present) but struggled to move the ball. Then moving onto Monday he was holding onto the ball too long in the pocket and totally misread coverage and threw an interception straight into the waiting arms of rookie linebacker Kamu Grugier-Hill during 11v11s.

At the moment it isn't the stage to panic because the team has only had one week of training camp and there are chances to adjust this, and get him back on track. These things happen to young players like Garoppolo, they end up slipping into old habits for no reason. All he needs to do is just keep grinding away under the expert coaching of Bill Belichick and Josh McDaniels and he will make it out of this slump.

With over a month left to the opener against the Arizona Cardinals and 4 pre-season games before that. He has plenty of time to perfect his game but it is worth note eluding too that Garoppolo is struggling at the present time.