Julian Edelman is the man with the swag says Malcolm Butler 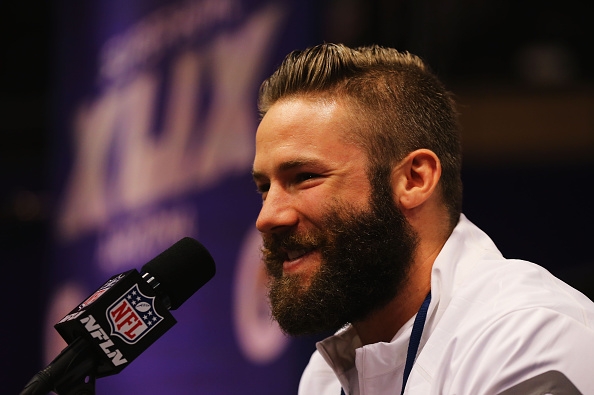 We all know Julian Edelman has a big personality in terms of not just on the field but off it as well. Each team needs a character on the team to have a swagger about them but most of time they are on defense. Players that come to mind are Richard Sherman (Seahawks), Von Miller (Broncos) and Clay Matthews (Packers). There are some players that do buck the trend though with Odell Beckham (Giants) and Cam Newton (Panthers) who have vibrant personalities and play on offense.

According to Pats cornerback Malcolm Butler and Wide Reciever Chris Hogan it is Edelman who is the man with the swag for the Patriots when they spoke to Mass Live's Kevin Duffy:


He's got the defense swagger, but he plays offense, Butler said,

It is great to see a player come out with funny remarks and wacky descriptions of his team mates because organisations media train their players heavily nowadays and it turns them into sounding like a broken record player, very repetitive and dull. Edelman though has shown his true colours with colourful descriptions of players in the past by saying Rob Gronkowski is like an eighth grader going up against second graders, as well quoting Dion Lewis is a short eighth grader going up against big fifth grader.

Edelman just seems to bring his natural swagger to the team which is a refreshing change to listening to a recording, which is what most players sound like these days in the NFL. In terms of his injury, he picked in camp this week it is believed to be not serious but it is probably best to monitor him with the season opener against the Cardinals only a month away.