Patriots excited for joint practices with the Saints 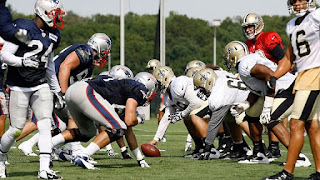 Today marked the Patriots first of two joint practices this week with the New Orleans Saints, who they will face in their preseason opener Thursday night. This is the second year in a row, and fourth time in six years the two teams have met for joint practices in the preseason. Despite this becoming somewhat of a common occurrence over the past several years, the excitement for both coaches and players alike is noticeable.

Joint practices always seem to create a buzz, and for good reason. It offers a nice change of pace, and naturally creates higher intensity and a more competitive atmosphere. The players get especially excited to switch it up and compete against one another. “Guys get tired of going against the same guys day after day and you learn tendencies” says Quarterback Jimmy Garoppolo. Safety Devin McCourty echoed those words, saying “We’ve been beating up each other for a long time so just getting some new faces, more competition going against people you haven’t seen all year, makes it better.” Both teams will surely benefit from getting the chance to practice against a different opponents and different schemes.

For head coaches Bill Belichick and Sean Payton, who’s respect and admiration for one another is well documented, these practices offer an opportunity to get together and bounce some ideas off each other. As Saints Quarterback Drew Brees puts it, “ They get together and say what do we want to do for our teams here? How much work can we get done to fast track our guys and put ourselves in as many in as many situations as possible, and try to simulate these game-like situations in practice so we can prepare ourselves for the season?” Bill Belichick has mentioned that having scrimmages in these joint practices are almost like having two additional preseason games and are always “a good tempo” along with noting Payton and the Saints are always “great to work with.”

Bill Belichick has long been an advocate of joint practices, and it seems to be a trend others around the league are starting to follow. Today’s practice is the first of ten joint practices that will take place across the league this preseason. The Patriots entire team will be taking a break from practice however, to watch teammate Nate Ebner compete on the U.S. rugby team in the 2016 Rio Olympics. Multiple players, Bill Belichick and several members of the staff wore number 12 U.S. rugby T-Shirts with Ebner’s name on them during today’s practice. “We’re all pretty proud of him and excited to watch him” said punter Ryan Allen.

For the fans in attendance, it's always fun to watch your team compete against stars from around the league even if its only a scrimmage. One particular matchup that’s sure to be entertaining will be between two rising stars in CB Malcolm Butler and WR Brandin Cooks. It will also interesting to see how the Saints attempt to defend the TE duo of Rob Gronkowski and Martellus Bennett, assuming they’re on the field together. No matter what happens, I'm sure these next two days will be among the most exciting of the preseason.