After each Patriots game, I'll be taking a look at the game film via NFL Game Rewind and posting my observations. Without further ado, here's what caught my eye from Sunday night's stirring win.

It was hard to pick any particularly aspect of Sunday's topsy turvy win over the Dolphins to focus in on for this piece. Jimmy Garoppolo's surgical first half performance certainly received consideration, as did a Jekyll and Hyde performance from a defense that produced four turnovers but got carved up in the second half by Ryan Tannehill. However, I decided to narrow in on which aspect of the game could reveal the most about this team going forward, and thus had no choice but to zero in on a surprisingly strong performance from the Pats maligned rushing attack.

You don't need me to tell you that running the ball is not considered to be the Patriots strength. Despite ranking as a top 5 offense in most major categories, the 2015 Pats featured one of the league's most anemic rushing attacks, averaging a dreadful 3.7 yards per carry on the season. They then defied expectations by not bringing in a single noteworthy addition to their running back depth chart this offseason, opting instead to give it another go with the maddeningly inconsistent LeGarrette Blount as their top between the tackles runner. To the average fan, it seemed like they had already punted on improving the running game before the season even started.

In fact, the game plan going into Sunday's tilt appeared to be one from last season's run averse playbook. Facing a Dolphins defense with a stout front seven but a porous secondary, the game plan appeared to be to spread the Fins out and allow Garoppolo to pick them apart. For a quarter and a half, it worked to perfection. Garoppolo left the game with his shoulder injury having completed 18-27 passes for 234 yards, 3 touchdowns and no interceptions. Overall, the Patriots had run 29 passing plays (two were negated by penalty) against only 13 rushes. It was the type of game plan the Pats have used countless times over the years, only this time it was Garoppolo instead of Brady carrying the offense on his shoulders.

Of course, things changed drastically for the offense once Garoppolo was removed from the game with his shoulder injury. The insertion of rookie Jacoby Brissett under center made such a pass-happy approach unfeasible. As a rookie, Brissett is still very early in his development, particularly given the massive jump in scheme complexity he's facing as he makes the transition from NC State to the NFL. Asking the kid to run the hurry-up, spread offense the way Garoppolo had would not only be unrealistic, but also unfair.

As a result, the team's approach pulled a complete 180. Once Brissett entered the game, the Pats ran just 14 passing plays and handed the ball off 23 times. While that number is skewed a bit by the team's final clock-killing drive (during which they ran 10 times and passed only twice), it was clear to the naked eye that the team was committed to using the run to protect Brissett as soon as he entered the game.

Unlike last season, when the offense failed to run the ball even when they seemed determined to establish a running game, the Pats were able to generate movement and give Blount the space he needed to get going in this one. Most impressive was that aforementioned final drive. The Patriots made no attempts to hide their intentions, lining up with a base two tight end look featuring fullback James Develin and special teamer Matthew Slater as the lone receiver. Despite everyone in the stadium knowing that Brissett would be handing the ball off, the Pats were able to run effectively, eating up a crucial 5:02 of game clock on the 12 play, 54 yard drive. By the time the red hot Miami offense got the ball back, there was only 1:04 remaining in the game.

This success running the ball is even more impressive when contrasted with their utter failure to do so against the same opponent less than a year ago. As most Patriots fans will painfully remember, the Pats came into their Week 17 matchup against the Fins needing a win to clinch home field advantage throughout the playoffs. With the beaten up offense running out of healthy passing game playmakers, the Pats appeared to be determined to establish some sort of running game to complement the passing attack in the playoffs. The first half saw the Pats rush 21 times and attempt just 7 passes, with those rushes generating just 63 yards, good for a sluggish 3 yards per carry. The Pats lost that game and home field advantage in the AFC Championship game in the process.

What has changed between now and then to allow this year's Pats to line up and run it when they want? Many will point to the return of legendary offensive line coach Dante Scarnecchia, who undeniably deserves plenty of credit for how his young offensive line has performed through two games. However, a look at the film showed five players in particular, all of whom were either not on the team or not available due to injury by Week 17 last year, who played key roles in Sunday's successful rushing attack.

I'll start with the two incumbent players whose return from injury has been a big factor in this year's team being able to run. A season ending injury to fullback James Develin was considered minor news during last year's preseason, but his crushing presence as a lead blocker was missed as the season went on and injuries necessitated a stronger running game. Develin performed his usual role as a lead blocker with aplomb on Sunday. This play, a nine yard run from that aforementioned final clock killing drive, serves as a good example, as he delivers a thud to Miami linebacker Jelani Jenkins in the hole, allowing Blount to charge ahead for 9 yards. 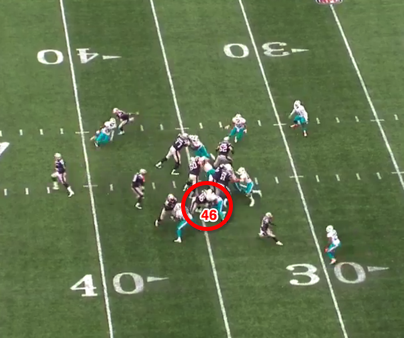 Another player whose return to the lineup was immense on Sunday was left tackle Nate Solder. While Solder is known better for his prowess in pass protection than as crushing run blocker, his athleticism in the open field proved to be an asset in the running game this Sunday. Several perimeter runs saw Solder serve as a second lead blocker along with Develin, giving Blount an imposing convoy to run behind. While poor Dolphins cornerback Byron Maxwell got more negative attention as the victim of Blount's hurdle and Martellus Bennett's stiff arm, he was also tossed like a ragdoll five yards into the Patriots sideline by Solder on one eye-opening play.

In fact, Blount's highlight reel hurdle one might have been the best play of Solder's day. The only reason Blount was able to get around the edge and generate momentum down the sideline was Solder, as the former first round pick displayed impressive quickness to swing around and cut off the penetration of defensive tackle Jordan Phillips, who had gained a step against Joe Thuney and seemed poised to make the play. With edge sealed, Blount was full speed ahead up the sideline, allowing him the momentum to make such an impressive leap over Maxwell for extra yardage.

Another Patriots lineman whose athleticism was crucial to their running success was rookie left guard Joe Thuney. When the Patriots ran to the right, those runs normally featured Thuney pulling from the backside and picking off a linebacker at the second level. It wasn't a perfect day for Thuney, who got called for two holding penalties and at times struggled with the size and power of Phillips, but his ability to execute that demanding assignment was key to some of the team's success on the ground.

One example of Thuney's utilization came on LeGarrette Blount's third quarter touchdown. This birds eye view show shows the basic playside blocking design. Marcus Cannon and Shaq Mason are set to use a double team to create movement against Ndamukong Suh, with Cannon expected to peel off of that double to pick off a linebacker if necessary. Martellus Bennett is expected to seal off the defensive end from the edge, while Thuney pulls from the backside and serves as the de facto lead blocker in the hole for Blount. It's a simple play design, one the Patriots ran varieties off throughout the afternoon. 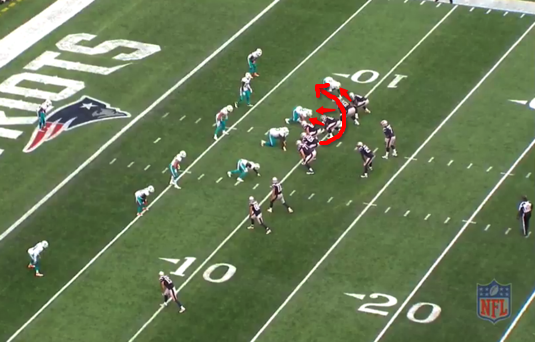 As you can see, you can get away with running the same stuff over and over again if the execution is this good. Each player executes his assignment with aplomb. Suh has no chance to disrupt the play due to the power Cannon generates on his down block; in fact, the movement the double team generates is able to disrupt the flow of the backside linebackers to the play. Bennett has no problem winning his one-on-one battle against a larger defensive end. Finally, Thuney gets to the hole on time and lands a block on Pro Bowl safety Reshad Jones, giving Blount the space to cut back inside and explode up the field. No defensive back is tackling him when he has the kind of momentum he's generated by the time he's close to the goal line.

Bennett is another new addition to this year's team who has made a big impact on the team's running game. Despite an impressive 5 catch, 114 yard, 1 touchdown stat line, Bennett arguably made a bigger impact in the running game than as a pass catcher. Time after time, Bennett was able to seal the edge, allowing Blount to cut back inside of him and attack up field. His ability to consistently win those one-on-one battles against defensive ends was huge for a second week in a row, as Bennett's blocking was also key in last week's dramatic win against the Cardinals. The Patriots running backs will be licking their chops once Gronk comes back, as he'll team up with Bennett to form arguably the best run blocking two tight end set in the league. For now, Bennett is being heavily relied upon to win the edge in the rushing game, and he's held up with two stellar performances so far.

Finally, LeGarrette Blount deserves recognition for a job well done. Blount's inconsistency has drawn the ire of Pats fans in the past, but he displayed what he can do when given good blocking Sunday. The hard charging Blount has always been a back that requires enough space to generate forward momentum to be effective. He clearly seems to be benefiting from the return of Develin, whose crushing lead blocks are a perfect compliment to Blount's downhill running style. With more space to operate, Blount has looked far more explosive and decisive as a runner than he did during last year's disappointing campaign. He was very difficult to tackle once he got going, regularly punishing the Dolphins mismatched defensive backs for extra yardage. When he's running like this, he adds a physical power element to the Patriots offense that was missing for far too much of last year.

That element will be needed this year, particularly over the next two Brady-less weeks. If, as most expect, Jacoby Brissett gets the start Thursday Night, we can certainly expect a game-plan that will heavily feature the power run packages that made up the majority of the second half game plan against Miami. Like Miami, Houston has a imposing front seven, including one incredibly disruptive interior defensive lineman (JJ Watt, duh) who must be schemed for on every play. The Patriots rarely ran Watt's way when they faced off against the Texans last season, and it would be shocking if they did so this week. Regardless of where they run it, maintaining offensive balance will be key to giving themselves a chance despite having a third string rookie at the game's most important position.