Winners and Losers: Patriots vs Texans

There is no better feeling than winning without key players when everyone is counting you out. But that is just the Patriots way! So naturally when you have a big win, including a defensive shut out, you have a few winners and losers. So let's get to it!

Jamie Collins
Jamie Collins. The man of few words sure knows how to make his presence on the field known. Collins led the team in tackles with 8 and assisted with 6 of them. He also snagged himself another interception and returned it for 18 yards. Collins proves to be a silent leader on the defense and has rightfully earned his spot on the winners list.

LeGarrette Blount
LeGarrette Blount has literally put the team on his back and run with it. Although this weeks performance didn't include any hurdling of opponents it did include another 100 yard rushing game. LeGarrette was the lead rusher with 105 yards on 24 attempts and 2 touchdowns. For a man who was considered on the roster bubble at the beginning of training camp, he sure knows how to prove himself. 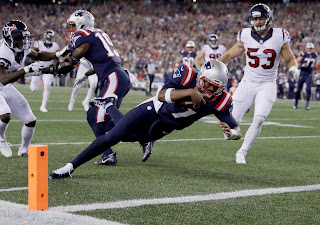 Jacoby Brissett
What a win to get for your first career start! Jacoby's arm proved powerful as he overthrew his receivers at times but he gained New England fan's trust with the first touchdown of the night. Jacoby completed 11 for 19 of his passes for 103 yards. He also capped off a successful drive with a 27 yard rushing touchdown. Jacoby rushed for 48 yards on 8 attempts. Although the quarterback status is unclear come week 4, Jacoby has certainly made his case for the job.

Ryan Allen
You rarely see a punter make the winners list. But Ryan Allen was the unsung hero of Thursday night's win. He positioned the Texans behind the 20 yard line 6 times with a long of 57 yards. Ryan did a great job of pinning the opponent deep in their territory, making for a longer drive and causing not them not to get into the Patriot's territory until well into the second half.

Bill Belichick
Bill Belichick earned his 226th regular season career win timing him with Curly Lambeau for fourth most of all time. The man is a creative genius. Not many predicted that the Patriots and their third string quarterback would pull off a shutout win against a usually stellar Texans defense. But Bill Belichick did it. Eventually you have to wonder when people will stop betting against him.