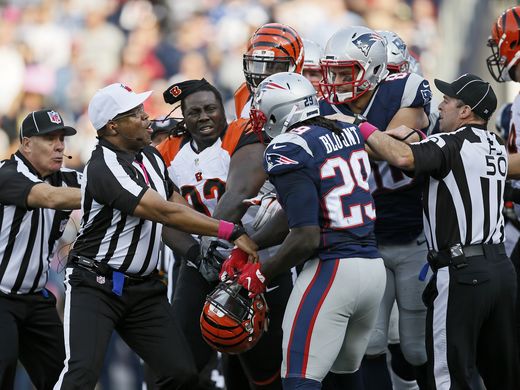 In the words of Ron Burgundy with one word substituted: You stay classy, Cincinnati. In the Patriots 35-17 win against the Bengals yesterday, there were some not too friendly actions that took place near the end of the game, causing Cincinnati's true colors to be shown in full throttle yet again.

First and foremost, the Cincinnati Bengals are by far the dirtiest team in the league, bar none. It was the Ravens a few years ago, with their WWE lineup of Ed Reed, Ray Lewis, Terrell Suggs, etc., but ever since the addition of linebacker Vontaze Burfict in 2012, the Bengals are on an island of their own when it comes to foul play. However, the dirty nature of this team, which mainly resides on the defensive side of the ball, cannot all be attributed to Burfict, as cornerback Adam "Pacman" Jones is no slouch himself when it comes to conduct fines. If you watched last year's Wildcard Playoff game between the Bengals and Steelers, then you've seen firsthand how dirty and cheap these two players and the defense are in general. Similar to his low blow on Martellus Bennett yesterday, which started all the drama towards the end of the game, Burfict made a similar play in that Wildcard game against Pittsburgh, charging at Antonio Brown's defenseless head as he tried to catch a pass. It was as dirty a hit as you'll see in the NFL that costed his team a playoff game, and obviously his three game suspension that was earned for it did nothing to change his style of play, as he intentionally went at Martellus Bennett's knees in yesterday's contest. In addition to Burfict's suspension, multiple other Bengals players, including Pacman Jones, were fined for on field misconduct that followed the incident with Antonio Brown. Screaming at referees, fighting with other players, having temper tantrums were all on display that night, and it's no surprise that this kind of behavior was shown again yesterday. Of course, all of these players promise and vow to change the way they play after they're slapped with a huge fine and put on bash by the league, but those kinds of punishments just don't work on guys like Vontaze Burfict, and never will.


To add to his long list of on field misconduct, it's expected that Burfict will NOT be suspended for his low hit on Bennett, but, once again, will most likely be fined. Tom Brady supposedly deflates a football but Burfict tries to end someone's career TWICE in the same year and gets a fine and a suspension that is less than that of Brady's. Great work NFL.

There could and should be tons of blame placed on the Bengals defensive players for their dirty play, however, some blame needs to be placed on the head of Marvin Lewis. The head coach for Cincy rarely has control of this team normally and especially not during their monthly tantrums, which shows come playoff time, as they haven't won a game in mid January in over two decades. Whenever his team is losing their minds and yelling at the refs and taunting other players, Lewis is simply sitting on the sideline doing absolutely nothing. It's a bit pathetic to let your team run wild like they have many times in the past, but it's even more pathetic to not stop them after they start costing the rest of your team games. Nice team you're running, Lewis.

Now, before anyone gets too worked up over the Bengals cheap theatrics in yesterday's win, some Patriot players did fall right into Cincy's verbal trap and stooped to their level a couple of times during Sunday's game. Namely Gronk and LeGarrette Blount, there was some definite taunting on the side of New England and, of course, the only flags that were thrown were against the Pats. However, while the Bengals were certainly at fault for their part in the whole fiasco, Gronk and Blount and others shouldn't have gotten so worked up and fall for the bait left dangling in front of their faces by Cincy players. That's not the Patriot Way. Let the Bengals and their hopeless playoff woes be the tormenters. All the Patriots need to worry about is winning in January, something no Bengal player can say they've done while wearing the Orange and Black.