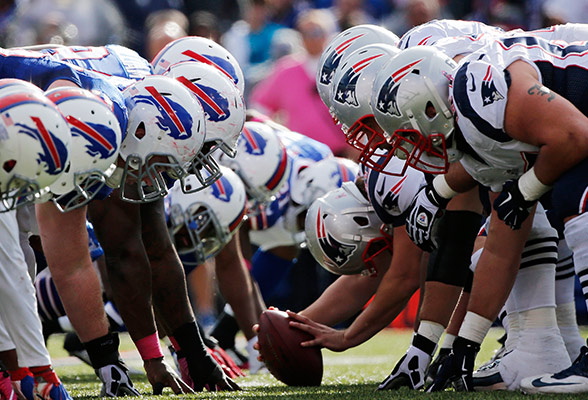 I think it's a safe assumption to say that pretty much all of Patriots Nation was shocked at the outcome of Week 4's game against the Bills in Foxborough. Even though New England was injury-riddled on both sides of the ball and had a third string quarterback with a throwing hand issue, no one, not even the blindly confident Rex Ryan, expected Buffalo to come into Gillette and shut out the Patriots. After the game, the Bills' players and coaches were overflowing with confidence as they just goose-egged the Pats in their own home; so how will New England fare this time when they travel to Buffalo Sunday? A whole lot better.

It's fairly obvious as to why the Patriots should do just a tad bit better this time around with the Bills but I'll say it anyway: Brady is back. Rex Ryan got very lucky last time in the fact that the Pats basically had no quarterback dropping back to pass but he won't have that same advantage come Sunday. Tom Brady has been a man on a mission this season, leading the league in just about every category he possibly can after missing the first four games, and probably didn't take too kindly to the way Buffalo was running their mouths after the Pats week 4 loss. Tom should be as terrific as ever but it's going to take more than just Brady to get the job done.

This game has the potential to make or break the Pats' season, as two losses to Buffalo in the standings with a half season still to go won't exactly give the Patriots heaps of confidence. However, if they can pull out a win in a place they always seem to struggle and move to 7-1 with a relatively easy schedule due up, it could very well put the AFC East out of reach for Miami and Buffalo. Although, in order to win this game, all players must be contributing and on top of their game, as the Bills are no slouches this year, especially at home. Bills running back Lesean McCoy has been one of the best all around backs in the NFL this year and the Pats defense can't afford to bend as much as they have in the previous weeks. McCoy ran all over the New England defense the last time these two met and need to shore up their front seven in order to stop him. The defense must also be vigilant in watching quarterback Tyrod Taylor, as he burned New England several times with his feet in their last encounter. Another thing to look our for with Taylor is the deep ball, which he likes to throw more often than not. New England has been relatively successful in preventing long passes, so as long as they can contain Taylor and McCoy and eliminate the deep ball, the defense should have no problem in forcing mistakes and turnovers.

As for the offense, I don't think scoring points will be too difficult as long as one unit steps up: the offensive line. The Bills have one of the best front-sevens in the league, and can get to the quarterback as well as any team the Pats have faced this year. Brady should have no trouble exploiting holes in the Buffalo secondary as long as he has time to throw, which definitely could be an issue with this ever-so inconsistent offensive line. However, if Brady just has some time to drop back and survey the field and the receivers aren't fumbling and dropping passes, the offense should be more than capable of putting up 30 on this Bills defense. That is a very big "if", although.

It's not often that a game against Buffalo could have such dire ramifications, as New England rarely loses a divisional game so early on in the season, but Sunday's game is by far the most important of the year. Two division losses to Buffalo will not bode well with the Patriots or the standings, and playing in the harsh environment of Ralph Wilson Stadium doesn't help things. Although, the Patriots have Tom Brady and Bill Belichick, and as long as the o-line gives him time to throw and the defense contains Taylor and McCoy, New England should come out of Rex Ryan's lair with a W and a record of 7-1.