Winners and Losers: Bills vs Patriots

Tom Brady
It's almost a perfect story. Beloved quarterback is exiled from the team and they go on to win 3 games in a row, including a shutout. But the last game they lose and fail to score any points. The loss yesterday proves that we do need Tom Brady. This is the perfect way to welcome Brady back. And all we can really say is Sorry Cleveland.

Rob Gronkowski
Much to fantasy owner's dismay Rob has been silent this season until yesterday. He finally slated his first catch of the season, a beautiful pass from Jacoby Brissett for 11 yards. Hopefully, Rob will continue making progress and get back to his spiking self. 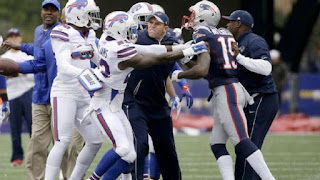 Malcolm Mitchell
The rookie wide receiver definitely understands what being part of the team means. Before the game as he and Jacoby Brisett were running onto the field Robert Blandon, a Buffalo player, came up to the duo and shoved the rookie quarterback. Jacoby kept running but Malcolm decided to let him have it. He was soon swarmed by Buffalo players, and eventually broken up by Patriots coaches. Mitchell's act showed that he had his teammates back and that's something to look forward too.

Coach Belichick summed up all of Patriots fans feelings about the game when he threw his Microsoft tablet on the ground. Bill was clearly angry about something that happened during the game. It could have been the fumble or the lack of points, or missed field goal, or the excessive amount of flags. Whatever it was, we all understood exactly how he was feeling.

Jacoby Brissett
The loss wasn't only Jacoby's fault. Football is a team sport, but when Jacoby fumbled in the red zone, it prevented the Patriots from getting points. Instead of sliding to prevent from getting hit, he tried to plow through the defensive players as a runningback would. As he was hit, the ball flew out of his hand and there were no Patriots players around to recover it, causing Buffalo to fall on top of the loose ball.

Stephen Gostkowski
The usually accurate place kicker also failed to put points on the board for his team yesterday. He missed his only shot at a field goal yesterday from 48 yards out early in the third quarter. Gostkowski was named AFC Special Teams player of the week after his Week 1 performance, but has since missed two field goals he would regularly make.

Chris Hogan
The game started out with a bang. Julian Edelman ran 90 yards all the way down to the Buffalo 1 yard line, setting up the Patriots in good position. It was beautiful. Until it got called back for Offensive Pass Interference on Chris Hogan. That really set the tone for the game.

All in all it was a rough game that hopefully we can put behind us. This week we gain back two main players in Tom Brady and Rob Ninkovich. So let's put this awful game to bed and On To Cleveland.