Winners and Losers: Patriots vs Steelers

Sunday's game may have been more of a battle if Steeler's quarterback, Ben Roethlisberger, would have been on the field. But still, the Steelers managed to keep it close through the first half, until the Patriots made their halftime adjustments. In a win against such a strong AFC team, thee were bound to be a few winners and losers. So lets get to them!

Winners:
LeGarrette Blount
LeGarrette Blount stellar season continued with another successful outing on Sunday afternoon. Blount racked up 127 yards for two touchdowns. He earned himself another FedEx Ground Player of the week nomination. He is on pace to have a career year. He already has 566 rushing yards before the half way point of the season. His best season was his rookie year in Tampa Bay with 1,007 yards. Blount looks to redeem himself against the Bills this weekend, earlier this season the Bills were the only team to limit LeGarrette to no touchdowns.
Rob Gronkowski 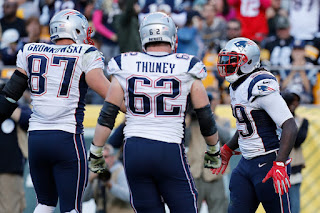 As soon as the Patriots began getting Gronk involved in the game on Sunday, you could feel the game shift. The Steelers could not provide an answer for the dominant tight end in the second half of the game on Sunday. Gronkowski had a total of 93 yards and one touchdown on the day. Gronk caught his 68th touchdown, tying him for most in Patriots history with Stanley Morgan. But Gronkowski is already focused on the next touchdown (putting him at 69) and we are all hopeful that he will get it on Sunday against the Bills.
Malcolm Butler
Butler was given the difficult taks of covering Antonio Brown and he thrived. Although Brown caught for 106 yards, Butler made an extraordinary interception in the end zone to hold the Steelers scoreless in the first quarter.


Losers:
Stephen Gostkowski
Stephen Gostkowski has found himself on this list again. He missed another extra point attempt on Sunday, which used to be automatic for the kicker. He worded it best when he said "I stink right now."
Chris Hogan
Hogan has been a great addition to the Patriots offense this season, but still he had Patriots fans everywhere after he fumbled on the very first offensive place of the game on Sunday. Although the turnover didn't result in points, it still was not how the game was intended to start.
Julian Edelman
Fumbles seemed to be a theme on Sunday. Edelman fumbled on a punt return in the fourth quarter that was eventually recovered by the Steelers. When asked about it Edelman simply said "It was just terrible ball security." He also has been getting credited with a crucial drop which would have been called back thanks to a holding call. Other than the fumble and the drop, Edelman had a decent day with 60 yards off of nine receptions. Julian is looking for his first touchdown on the season s the Patriots travel to Buffalo this Sunday.

What do you think of my list? Let me know in the comments or tweet at me @football4gals !