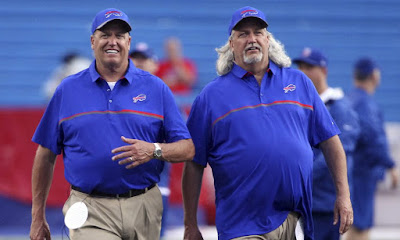 The AFC East got a little quieter on Tuesday as the Rex Ryan era came to end in Buffalo.

ESPN's Mike Rodak reported that the Ryan brothers had been relieved of their duties, and that OC Anthony Lynn would be taking over as the team's interim head coach.

Since 2009 Patriots fans have grown accustomed to the constant bombardment of Ryan's hyperbole and shenanigans in the media. As they watched his pickup truck pull out of the stadium parking lot in Orchard Park on Tuesday, it's easy to see why the general sentiment towards the Ryan departure would be that of pure joy.


Last month, Rex Ryan said he'd have to be dragged kicking & screaming out of Buffalo. Moments ago, he left 1BD in his pickup. @News_8 #Bills pic.twitter.com/ug7FVJxXdK

However, let's not get too excited.

Rex has done a lot for the Patriots organization in his 7 years with the Jets and Bills. Far beyond his ineptitude with roster management and development (prime example: Danny Woodhead), the man yielded 12 wins in 17 contests to Bill Belichick, mostly by fueling those Patriot teams with weekly bulletin board material.

His 61-66 overall record has rooted half of New England's divisional foes in a foundation of mediocrity has lasted for years. His personal contribution to the success of the Patriots organization should be rewarded. Perhaps with a position on the Miami defensive staff?

1. Quieter news cycles for Patriots media members for two weeks out of upcoming seasons.
2. A sharp decrease in foot-related social media trolls.
3. A body shop in western New York was about to receive a walk-in client.