Alan Branch is key to the defense's success Sunday 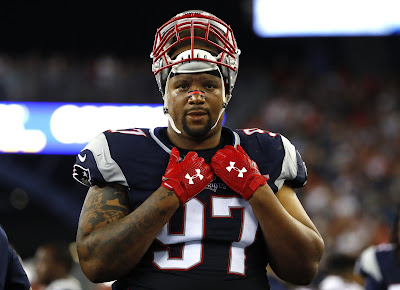 When assessing the key personnel battles in Sunday's AFC Championship game, Alan Branch can not be overlooked.

No, literally, you can't look over him.

The 6'6" 350 pound long-armed Albuquerquean is, in his 10th year in the NFL, playing some of the best football of his career. So good in fact that, that teammate Dont'a Hightower categorized Branch's play as "Pro Bowl Level", according to ESPN's Mike Reiss.

Branch and fellow defensive tackle Malcom Brown finished the regular season as the NFL's second and third best interior defenders in run-stop percentage according to PFF.

In a game stocked with plenty of super stars, Branch and Brown's match ups with Pro Bowl center Maurkice Pouncey and second-team All-Pro right guard David DeCastro should not sneak under anyone's radar. The duo will need to create penetration and limit Pouncey and DeCastro from getting to the second level, a tall order when you watch them on tape against Kansas City. Outside of Dallas' Travis Frederick and Zach Martin, there likely isn't a center-guard tandem in the league with the combination of athleticism and power that these two decorated Steelers possess.

At the age of 32, a 2014 Super Bowl win under his belt, and free agency on the horizon, Branch could be a candidate for retirement after the season. It may just depend on how it ends.