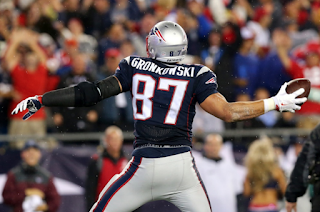 Big news coming from New England today as head coach Bill Belichick announced that Rob Gronkowski will head into training camp with no limitations. In typical Belichick fashion his comment was short and sweet stating, "He has no limitations that I know of. That was all pretty much over with at the start of the offseason program." Gronkowski is coming off a season that was cut short due to a back injury that required surgery. He was only able to play in eight games and finished with 25 catches for 540 yards and 3 touchdowns. This news will bring joy to many Patriots fans as the team looks to
repeat as Super Bowl champs.

Outside of the fact that Gronk is already motivated to come back and show he is his old self, he also has a very incentive loaded contract heading into the 2017 season. This will only make him more of a matchup nightmare for defenses this year as he sets out to prove he still is one of the best tight ends in the NFL, if not the best.

As training camp starts you will see that connection between Tom Brady and Gronk pick up right where it left off. At this point this passing combination looks to be something that will only happen in practice. Phil Perry from CSNNE.com reported that Gronk has not played in a preseason game since 2012. That is expected to continue to avoid unnecessary hits before the regular season starts. That means Patriots fans will have to wait a few more weeks before they see that famous "Gronk Spike!"