Tom Brady reports to training camp as motivated as ever 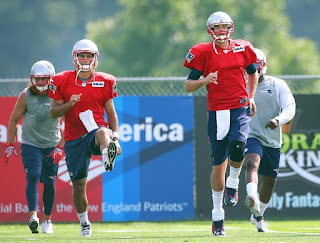 At the spry age of 39, Tom Brady reported to New England Patriots training camp Monday ready to grind. The entire team starts practice Thursday but Brady reported Monday eager to get on the field with his teammates, many of whom are more than a decade younger. The longevity of his career is a marvel considering the success he has accomplished in his 18 years in the NFL. All his successes have not diminished his fire to win and compete, which should be a welcome sign for Patriots fans.

The average lifespan for an NFL player is around 3.3 years. Of course, Brady is a quarterback and has rules in place to protect the health of the most important position on the field but his continued MVP level play is remarkable. Peyton Manning won a Super Bowl at age 39, but his arm strength and other physical abilities had significantly fallen off. He retired after his defense carried him to a Super Bowl victory over the Carolina Panthers. Brett Favre played into his 40 year old season but had 19 interceptions and just 11 touchdowns in 13 games (ESPN.com). The only successful quarterback to play into his 40’s was Warren Moon in the 1997 season where he threw 25 touchdowns and led the league with 245 passing yards per game (Pro Football Reference). There is little doubt from Brady’s body, mindset and weapons that he will vastly exceed Moon’s 1997 season.

Brady has changed the game of sports, not just on the field but also off the field in how a player takes care of their body. Greg Bishop of Sports Illustrated wrote an awesome article on how he makes such an effort to treat his body as his number 1 asset. This isn’t a personal choice of just Brady but one that has spread to many different leagues and sports as Bishop notes. He has been at the forefront of this movement of long stretching routines, strict diets and recovery pajamas and it could be the future of sports medicine. The Celtics trainer of 30+ years Ed Lacerte was fired this offseason. Does the Patriots quarterback have anything to do with who the Celtics employ as their trainer? Doubtful but its worth looking at the impact of Brady’s success into his late 30’s and possibly 40's on sports medicine. Whatever the effect of Brady’s off the field routine, it has ensured he his healthy and ready to kick butt in training camp and beyond.

There has never been a competitor like Brady in the history of football to have all the accolades and be ecstatic like a kid on Christmas morning to go to training camp. Most guys dread this time of year, as it's hot and hard work needs to be put in for a successful season. That is what makes Brady one of the greats and what makes his Instagram from Monday so exciting for Pats fans. Everyone should know that Brady will give his best effort on the training camp field and all the way to the Super Bowl. Training Camp kicks off on July 27 with a 9:15 am practice.