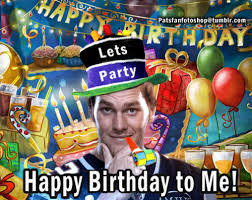 August 3rd, 1977- the day the world changed forever. This is the day that Thomas Edward Patrick Brady Jr. was brought into the world.

Since that day, everything he's touched has turned to gold. And since 2001, he's turned the Patriots into what the 90s Atlanta Braves wanted to be - multi-time champions with an insane string of division titles and other miscellaneous accolades.

Today is Brady's 40th birthday, and the Internet has pulled out all the stops:

NFL.com made a top-40 Brady moments list. They also put together videos of all of his 208 career wins and his 40 longest touchdown passes.

The Patriots put together a petting zoo with actual goats in it for fans to enjoy at the team's practice today. Speaking of the fans, they sang happy birthday to him.

There's even a sign you can take a picture with, but you can't touch it.

In the creative food department, a local cupcake establishment made avocado cupcakes for him and were in the QB room at Gillette Stadium.

And finally, this is my favorite Brady-related thing I saw today. Mike Reiss put together a piece of untold stories about Brady from friends and former teammates. All of them are really good, but two that stand out to me are these:

Brian Hoyer, Patriots quarterback, 2009-11: "We played up at Buffalo and we couldn't fly back into Boston because the weather was so bad, so we had to stay the night in Rochester. We drove there, and we all decided we'd go out to dinner together. Tom being who he was, he usually couldn't come to a team event like that. We might be at Capital Grille and he is sneaking in the back door and then people realize he's there and he has to leave. But this was impromptu at Dinosaur Bar-B-Que in Rochester. The whole team is there. And it turns into a beer-chugging contest. You have linemen, Julian Edelman, they all think they are going to win. Then someone says, 'I heard Tom is really great at chugging a beer.' We don't usually get to experience him like this, but we finally coax him into doing it. He does it, and let me tell you, you couldn't have poured out the beer faster into a glass. It was unbelievable. And he slams the mug on the table and puts both fists in the air. He walks away with a look on his face that said, 'You really thought you were going to beat me on this?' The place went nuts."

Sebastian Vollmer, Patriots offensive tackle, 2009-16: "I'm always impressed, because when you walk into that locker room, everyone knows who Tom Brady is. But he introduces himself to every rookie: 'Hey, my name is Tom Brady. I play quarterback.' It's not like, 'I'm the guy.' He's not arrogant. Just humble from the perspective of, 'I don't expect you to know me, I am going to prove to you I can play.'"


The first one is just funny as hell, especially when you consider how ridiculous Brady's diet is these days. One beer to him would probably be the same thing as eating pizza every night for a year. And the second one just shows how humble he truly is, despite what some of the public thinks about him.

Thankfully for Patriots fans, it looks like he's still got some really good years of football in him. Happy birthday, Tom!