The last time the Patriots were losers 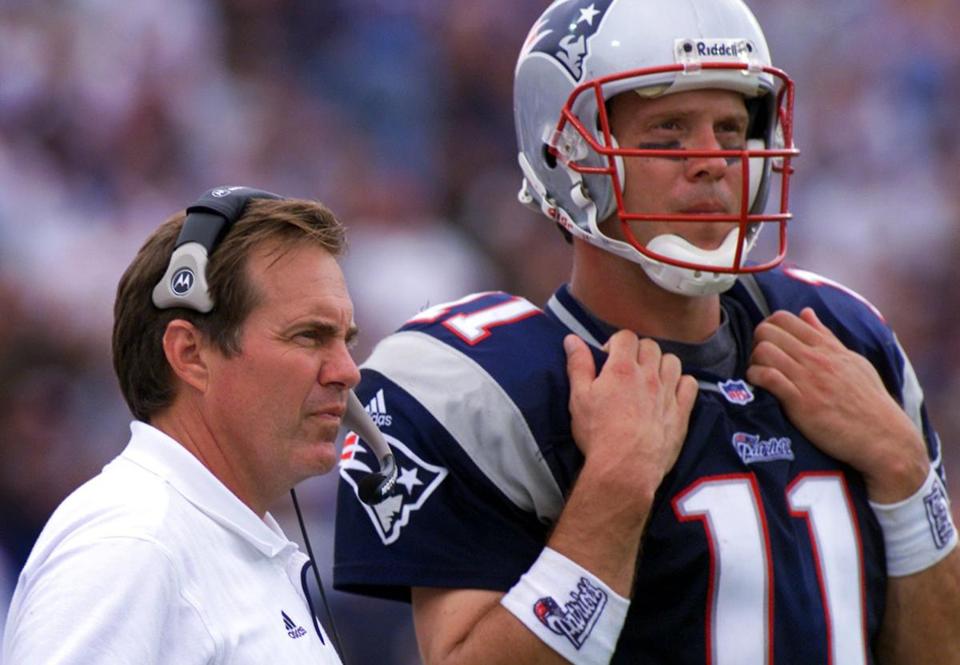 I know this title is hard to imagine for many Patriots fans, including myself, but I can confirm that the Patriots were once losers. It was a long time ago, mostly referenced in history books briefly before discussing the greatest dynasty in NFL history. The most interesting part about this 2000 Patriots team was that Bill Belichick was the coach and Tom Brady was a quarterback on the roster, albeit not a starter yet. How could a team that went on the win the Super Bowl in 2001 suck so bad and go 5-11 the year before? Alan Siegel of The Ringer chronicles the team before the dynasty started.

The Patriots had just missed the 1999 playoffs and owner Robert Kraft had seen enough regression from the team to fire head coach Pete Carroll. This opened the door for the greatest coach in NFL history to receive the opportunity he needed to succeed. After being a head coach with the Cleveland Browns from 1991-1995, Belichick had amassed a 36-44 record but he was confident his system and approach could be successful in the NFL. Belichick had served as the Patriots defensive backs coach in 1996 when the Patriots overachieved and reached the Super Bowl so he was familiar with some defenders including safety Lawyer Milloy. Milloy told owner Robert Kraft when asked about Belichick that “he could be a great coach to lead the organization to where it needed to go.” Belichick ultimately became the head football coach of the Patriots after a contentious saga with the New York Jets but Milloy’s prediction would not come true initially.

The Patriots struggled mightily out of the gate in the 2000 season going 0-4. Belichick didn’t get his first win as the Patriots head coach until October 1st. On November 12, the Patriots played in Cleveland and Belichick was rained with boos in his return to his former team. The Patriots lost an uninspired 19-11 game which Milloy called “the most embarrassing moment of my NFL career.” Two weeks later, as the Detroit Lions were walloping the Patriots 34-9, rookie Tom Brady made his NFL debut and threw 3 passes. It wasn’t a bright spot in the midst of a lost season but this unknown rookie would change the fate of this anemic franchise. The Patriots season ended in heartbreak in week 17 as the Miami Dolphins hit a 49-yard field goal to push the Dolphins ahead with 9 seconds left.

After that final loss of the 5-11 season, quarterback Drew Bledsoe told reporters “it was the most frustrating season of my career. I’m worn out mentally, physically and emotionally.” Bledsoe was sacked 45 times; the 4th most in the whole league and the Patriots offense was the 7th worst in the NFL. Belichick had his work cut out for him going into 2001 with fans and media members already questioning the unorthodox coaching style.

Amid the losing though, Belichick was sowing the seeds for success. One of his first moves was releasing pro bowlers Ben Coates and Bruce Armstrong. The reason was that they were in there thirties and refused to take a pay cut. Belichick was handed a cash strapped team and had a vision of how to value players. Cutting or trading players in their prime would be a staple of keeping the Patriots competitive for so long. The hard salary cap has inhibited so many teams from achieving long lasting success but Belichick has beat this system but finding value all over the roster and never overpaying players.

Belichick ran a tight ship as his military father taught him. He worked players hard the second the 2000 training camp started. Defensive lineman Willie McGinest knew the demanding work was “to implement his system and get us to understand how things were gonna be.” Belichick has long been known for his incredibly complex schemes which only bright, hardworking players understand and the 2000 team had the task of being the first to learn. After a horrible first day of camp Belichick ripped into his team. “We have got too many guys who are overweight, too many guys who are out of shape and too many guys who just haven’t paid the price they need to pay at this point of the season. You can’t win in this league with 40 good players when the other team has 53.” This quote in emblematic of the approach Belichick has demanded of his players since day 1. The Patriots would not be where they are today without the mindset that every player on the roster is important and brings the best out of the others. Hard work has always trumped talent in Belichick's book.

The 2000 team came to understand how practicing every scenario during the week made Sundays a piece of cake. Backup quarterback Michael Bishop completed a Hail Mary against the Indianapolis Colts at the end of the first half in a 24-16 victory. It's not often that a Hail Mary is used but the Patriots had practiced that play repeatedly during the week before the game and were uniquely prepared for that end of half scenario. Milloy felt “like we won the games during the week. On Sundays we were out there like we were in The Matrix, like we had already been there before.” This fact was another huge reason why the Patriots won so many games from 2001 until the present; they always knew what to expect from their opponents and was well versed in the best ways to beat them.

Lastly, Belichick didn’t take shit from any player, no matter where they came from. Linebacker Andy Katzenmoyer showed up late for a meeting early in his tenure and he did not care the player was a former first round pick. He ripped the linebacker for being late and kicked him out of the meeting in front of the whole team. Brady has been the face of the team since he became a starter but has received the brunt of criticism from Belichick in practice. It made Brady a better player and held the entire team accountable which is why you see so many contributors up and down the Patriots rosters over the years.

The 2000 Patriots were awful as a team but had some great individual players. Once Belichick got these guys to buy into the team aspect, to work their asses off everyday and got lucky with Brady, then you see the success start to pile up. Sometimes losing is the key to finding the winning formula and Belichick and the 2000 Patriots show that winning takes sacrifice, which ultimately led to the unprecedented success since 2001. It took Belichick a little time to implement the winning formula in New England but the results after the 5-11 2000 season speak for themselves.

Follow me on twitter @jakescearbo to talk more about this infamous 2000 squad or anything else Patriots! Check out my website at jakescearbo.com to read more of my stuff!

Via The Ringer
Picture via The Boston Globe