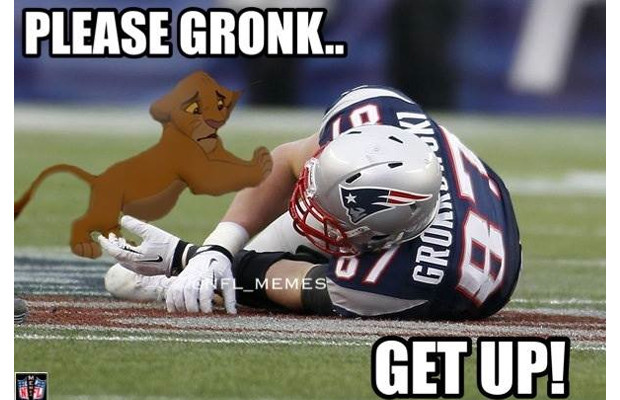 Ok, hand up…I did something stupid.  It is not the first time, and it won’t be the last.

Earlier this week I wrote a think piece on how the Patriots would be well suited to use Gronk as a specialist in the Red Zone and on third downs.  This strategy will help keep him healthy when it really matters.  Here is an excerpt:

Loyal reader Nicholas Kaknes pointed out in the comments that I am a first degree pickle-head:

Of course he is correct.  Gronk was not even drafted until 2010!  (I think I am still traumatized by losing the ’07 Bowl).

In light of this, I thought it might be interesting to see exactly how many more rings I should have if he were healthy his whole career:

2011: Ankle njury occurs against Baltimore in the AFC Championship game.  Pats lose to the Giants in the SuperBowl.  Gronk plays in that game, although he is clearly limited, basically used as a decoy.

2012:  Arm gets broken on the field-goal unit mid-season.  Gronk comes back and re-injures the arm in the playoffs.  Pats lose in the AFC championship game to the Ravens 28-13.

2013:  ACL gets snapped in half by TJ Ward on a seam route mid-season.  Gronk misses the rest of the way and the Pats lose to Denver in the AFC Championship game 26-16.

2014: Gronk is healthy all season, we win the Super Bowl.

2015: A helmet to the knee mid-season took Gronk out for a little, but he was there when it mattered.  Patriots lose in Denver 20-18, but Gronk kept us in that game.

I dunno how fair it is, but I think there are at least two more rings for the Patriots if Gronk is available full time.

What do you think? Leave your thoughts in the comments.