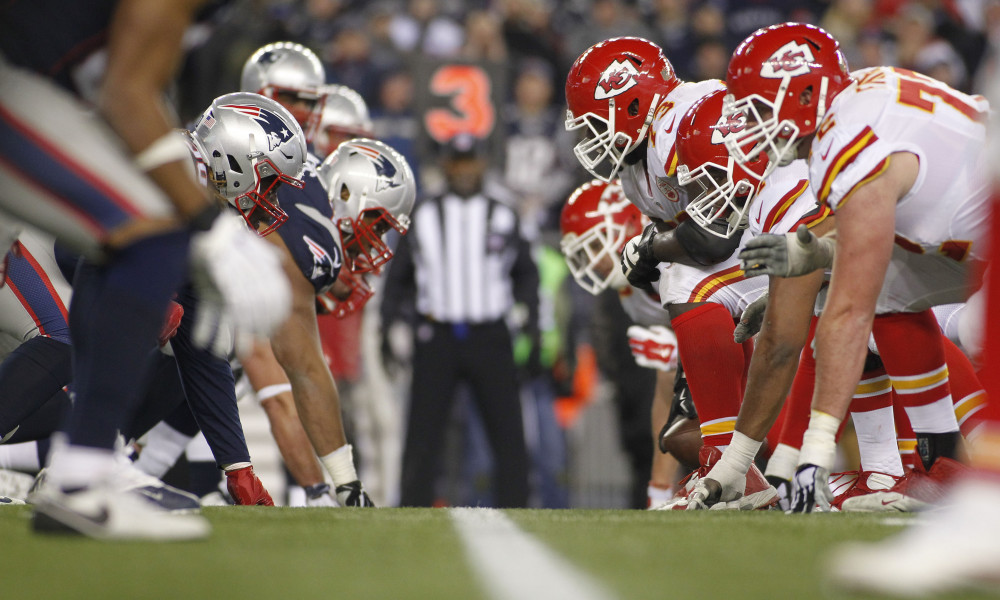 It's very hard to be giving out awards after that embarrassing 42-27 loss to the Chiefs. This blog is here to be realistic and illustrate which players lived up to expectations and which ones need a wake up call. There will be more than a few wakeup calls after that week 1 debacle.

This blog series will include awards that will continue every week throughout the season and ones that will be specific to certain weeks. This week will be tough to find some positives in awards but the grades can be the wakeup call that this team hasn't figured out their roles yet. In time it will be a better product on the field but for now, fans are left with anger and disgust.

Lets start with the superlatives and awards.

1. Cutest Couple (Best combo with Brady that game):
This has to go to Danny Amendola and Tom Brady. It was blatantly clear that Amendola was taking the majority of the targets that Edelman would have received out of the slot. He ended with 6 catches for 100 yards but did leave the game with a head injury late in the game. This has been the problem his entire Patriots career. He is not durable and normally the Pats have been careful with his snaps over the regular season but clearly not last night. If he gets back healthy he could be Brady's go to target in the slot and be in a position to win this award many times this season. Brady trusts him and thats what makes this couple so darn cute.

2. Most Likely to Succeed on offense:
This award has to go to Mike Gilislee. He was the only Patriots player who scored a touchdown so he deserves this award more than any other offensive player on a day where they struggled. He was a beast in goal line situations which bodes well in him being the short down back. He had a few other runs where he looked explosive getting into the secondary. Gilislee was stopped twice on fourth down which makes him less worthy for this superlative. On a night where the offense was pathetic, Gilislee was the only successful one to merit this.

3. Most likely to succeed on defense:
No one deserves this. Absolutely awful display from a defense with a ton of talent. More on the defense later though.

4. Most athletic:
Of course this will go to Brandin Cooks. He had 3 catches for 88 yards and showed his explosiveness on a few occasions. He didn't get enough targets for this talent but damn can that guy fly. It should be exciting to see him develop into a lethal weapon for the offense. It'll take a few weeks to acclimate to the offense but he will be just fine.

5. Gritty Player of the week (best lineman):
This was another tough award to hand out because the defensive line created absolutely zero pressure on Alex Smith. He had the best game of his career BY FAR. He passed for 368 yards and 4 touchdowns. That was the first time in his NFL career that he passed for more than 300 yards. The gritty players of the week should then go to the offensive line who kept Brady clean for most of the game. Brady had plenty of time in the pocket to throw its just that no receivers could get open. The offense was out of sync but it was not the o-lines fault whatsoever. If that group can keep it up the offense will surly turn their plays around.

Class Clown (worst player):
The front 7 was the absolute worst that Bill Belichick has put out in a long time. Its reminiscent of the 2009-2011 defenses which made mediocre quarterbacks look like hall of famers. Alex Smith looked like he was the best QB in the league. Smith dumped the ball down a lot to his check down option which was seemingly never covered. Smith oftentimes didn't have to throw the ball past the line of scrimmage to gain 8-10 yards. The crossing routes were killer as well. There seemed to be no linebackers patrolling the middle of the field and after Hightower went down with a knee injury they were so depleted at the position. No pass rush and no presence in the middle of the field made it easy for the Chiefs to rack up 537 total yards. The secondary, while on the topic of the defense, made some boneheaded plays that led to 2 long touchdowns. Those mental mistakes never happen on the Patriots and should be concerning to fans. Hopefully the front 7 will figure their shit out and lose the label of class clown.

Best Minor Injury News Ever award:
This award goes to the linebacker who is the glue of the Patriots defense, Dont'a Hightower. His knee got rolled up on and he stayed down far longer than any fan should be comfortable with. He even went under the dreaded tent that Julian Edelman did after his knee injury in the preseason. It was almost salt on the fresh wounds of defeat but the initial reports are promising. Hightower may even be ready to play a week from Sunday with a minor knee sprain. He is an essential piece to a defense looking for an identity early in the season so thank the football gods he isn't seriously injured.

The baby soft award:
The defense as a whole gets this one. Swiss cheese. There aren't enough negative adjectives to quantify how terrible they were last night. There was too much Cassius Marsh, Jordan Richards and Kyle Van Noy for that defense to be successful. Belichick has his work cut out for him but thankfully has an extra long week of preparation for the Saints.

The Coaching Award:
The last award of this week goes to none other than Andy Reid! Did anyone think its possible that Reid would out-coach the GOAT Bill Belichick? Reid did so he deserves props. Ultimately, the struggles of the Pats last night may have been because Belichick, McDaniels and Patricia don't have a clear vision of how to employ their players on the field. Injuries contributed to that as well but that can't be an excuse because injuries are a part of football. The Pats got crushed in the second half and whatever adjustments were made on either side of the ball had no effect on the blowout. The Pats coaching staff cannot be out-coached by Andy Reid and need to put their players in the best positions to be successful. That will be a big story line next week playing a normally potent Saints offense.

Lots of room for improvement for the team but that football. Adjustments are constantly being made and the Patriots should be just fine in the long run. It was a shocking outcome but will only help the team in the long term.

Follow me on twitter @jakescearbo to talk more about the outcome of week 1 and what you think needs to be changed for a better result next week. Check out my website at jakescearbo.com to read more Patriots pieces by me! Keep an eye out for the awards and grades for next week!