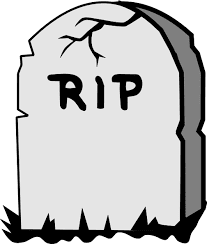 The 2017 season for the Buffalo Bills passed away earlier today after a 23-3 throttling at the hand of the hated New England Patriots.  After reaching a high-water mark of 5-2 earlier in the season, the Bills looked primed to make a playoff run.  That ended today as the Patriots made them look like a second class organization.

Rob Gronkowski especially contributed to the death of Buffalo.  He contributed 9 catches on 11 targets for 147 yards.  His late hit after a Tom Brady interception looked like a play out of NFL Blitz, but too little too late for Buffalo.

With 4 games left on the schedule, the Bills could possibly still rebound.  However, Tryod Taylor left with an apparent knee injury and looks done for the season.  A questionable and disastrous call to start Nathan Peterman earlier in the season indicates that the Bills are indeed D.O.A.  He is not the answer, and likely will not help the Bills win any games.

Buffalo also must play the Patriots again which does not look good.

The Bills are survived by the Dolphins and Jets who both won today.  Both are unlikely to fulfill Buffalo’s lifelong dream of making the playoffs.