The Future of the O-Line – A Think Piece 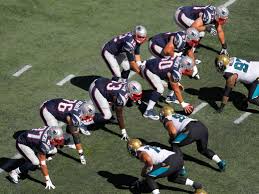 So it looks like the Patriots have bought into playing Tom Brady for at least the foreseeable future.  I love it.  I wouldn’t have it any other way.

I’m a loyalty guy.  I was a Drew Bledsoe guy back in the day.  Once you are my guy I will go to war for you.  Tom Brady is my guy.  I’m willing to ride this thing into the ground with him as long as he retires a Patriot.  (I’m even ok that Jimmy G is lighting up the world in San Francisco.  He is making our draft pick compensation worse by the day and I don’t care because we get to keep Brady)

In order to keep Tommy Boy upright and healthy for as long as possible, we need to make sure this offensive line is all set.  I’ve always said that a team is never done building its O-line.  There always seems to be another piece that needs replacing.  If you ignore the problem long enough, it all falls apart.  There is no easier way to destroy a team than allowing the O-line to deteriorate.

Analysis:  All things considered, we have a good group here.  Solder is a priority free agent, and he will be for most of the league too.  There is a shortage of Tackles, and the ones that hit the market are getting PAID.

If they can get him back (It really needs to be a priority) it looks like the Pats can keep this group together through 2019 at least.  Continuity is key.  If they can’t get Solder back, it could be trouble.
They also need to rebuild depth a little bit.  Tony Garcia was a good draft pick, but missed this whole year.  Ted Karras has potential at all three interior line spots, but he was not great when stepping in at center.  Cole Croston is apparently a guy too.

I’d like to see them address the tackle depth again in the draft, but otherwise I think it is steady as she goes for a while.