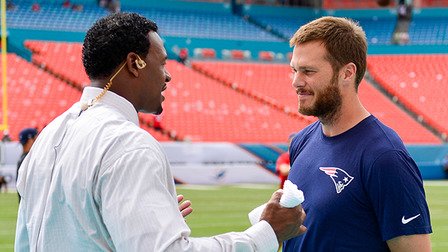 Everyone knows Tom Brady's playing career has an expiration date, but no one knows for sure when that will be.

Former Patriot Willie McGinest thinks he has an idea, though. He believes if the Patriots win Super Bowl LIII, Brady will retire after the game.

“I think there’ll be a walk off if he wins the Super Bowl this year,” McGinest said. “I don’t think it’ll be 45 years old. I think he’ll walk off and say, ‘The game’s been amazing to me and now I’m going to figure something else out.’”


While nothing is off the table at this point, this seems like a fairly reasonable scenario. If the Patriots do indeed win the Super Bowl this season, it would be the 41-year-old's sixth title. Brady, like few have done, would walk away a champion and can focus on his business venture with Alex Guerrero full-time.

Given how maniacally competitive he is, going out on top feels like something Brady would want. Why risk going into another season and have your final game be a loss when you're over 40 and have six titles?

That being said, the comments from McGinest come at a time when Brady just might have given Instagram an idea as to when he's going to be done. So there's a very real chance McGinest could be wrong.

Only Brady knows at this point.