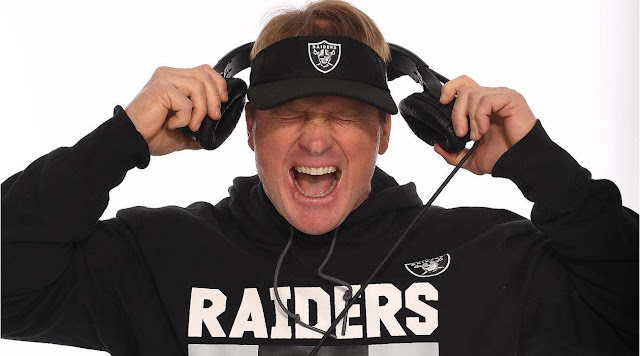 Jon Gruden made a big splash this off-season when he decided to return to the Raiders and leave his job on Monday Night Football. It seems as if everyone was confused, why he would leave the perfect job for him at ESPN to coach a decent team without a playoff win in the past fifteen years? They didn't even make the playoffs from 2003-2016.

The answer to that question has to be the sweetest answer ever, Tom Brady. Rewind back to 2002, when the Patriots squared off against the Raiders in that snowy and cold AFC Championship game, a game that still sticks with Gruden to this day.

In a feature of the coach on Bleacher report, Gruden explains why Brady is the reason he came back to coaching today. "He can't run, can't jump, he's too old. He gets his ass knocked off. But he's a Terminator. He ran me out of Oakland in the Tuck Game. Damn. He brought those bastards back in a two-minute drill to beat us in a driving snow. They didn't do anything the whole night until the game was on the line. And here I am 20 years later, and guess who's still there. That's why I'm back."

If that quote doesn't give you all the joy in the world, I'm sorry but you're hopeless. This is just a testimony to how much Brady and the Patriots are in every other team, person, and fan's head. Its been twenty years since this game. Let me say that again, TWENTY YEARS.

PSA to anyone reading this that isn't a Pats fan: Tom Brady and the Patriots bought real estate in your teams head coach's nightmares and they're sticking around for a little bit longer.