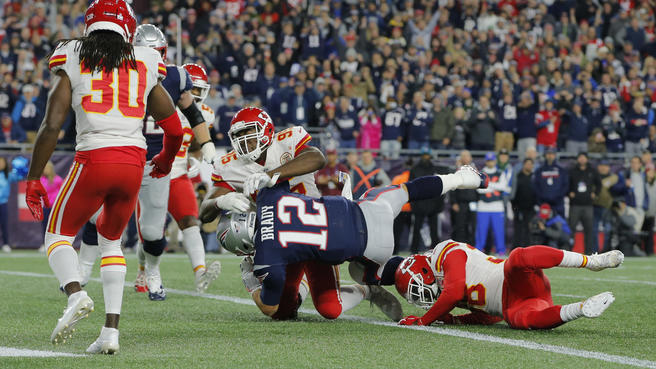 Big players make the big plays when they count. Tom Brady did just that in the high scoring (43-40) win over the Kansas City Chiefs last night.

One of the biggest plays of the game came for the Pats on a 3rd & goal late in the 4th quarter. In what first looked like it would be a sack forcing a field goal, Brady decided to run it in himself, taking a big hit, but nonetheless made the play. It is always tough to watch your quarterback take a big hit, but it becomes a lot harder when he is still playing in his early forties.

When asked about the run, Brady had this to say: "I don't know what happened," he said after the game. "They doubled three guys on the play. I'm just glad. Gotta watch it tomorrow, but I got close to the goal line and I just tried to get it in. We needed it."

His offensive linemen found themselves in a very difficult position, because the Chiefs only rushed three men on the play, so there wasn't much they could do.

"I was kind of stuck in no-man's land," David Andrews said. "Think it was P-coverage. They only rushed three. I was going right with the protection. Tried to swing back when I saw there was only one guy coming right. I got to where the d-tackle went inside and Joe [Thuney] flushed him. I turn around and Brady is just standing there."

Luckily, Brady's pliability workouts appear to be working, because he did take a pretty good shot in the endzone, but showed no sign of injury.