X's and O's: Patriots at Titans 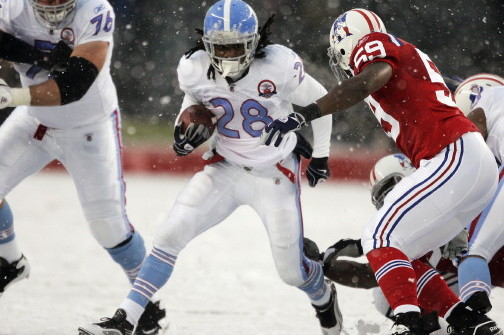 Photo by the Associated Press

The Patriots are heading to Tennessee this week to face off against the Titans and I have no idea about this game. I really think that the Patriots should embarrass the Titans, like in 2009, but something inside of me is telling me its going to be a closer game than we think. Mike Vrabel, former Patriot is in his first year of being the Head Coach and got some help from other former Patriots, Malcom Butler and Dion Lewis.

Sony Michel is likely to play this week, so it'll be interesting to really see his impact on the Patriots offense, due to the fact that the Pats have looked a little slow on offense in his absence. The Titans play man to man defense 44.4% of their defensive snaps. The Titans play a 3-4 front as well. Since the Titans play a man to man defense, establishing a run game will be crucial. If the Patriots can establish their run game early it will lead to a big game. The Patriots can then work in play action passes, RPOs, and actually run it down their throat. The Titans rank at eighth in the NFL in yards allowed per game with 333.5, yet they rank at 25th in passing yards per game at 226.2 and 17th in rushing at 107.2.

I think this game can go either way today. I feel like I say this every week, but it all comes down to the running game. If the Sony Michel runs like he has in his bigger games, the Pats will win by two or three touchdowns. If he can't run as well today I could see the Pats winning by a touchdown or even losing by a touchdown. My final prediction is the Pats winning 42-17. With Josh Gordon getting a touchdown, Gronk Getting his first, Michel running two touchdowns, Edelman and White both get a touchdown as well today. Brady will also break 1,000 career rushing yards.

Until the Game lets enjoy this clip from 2009.