X's and O's: Patriots vs Vikings 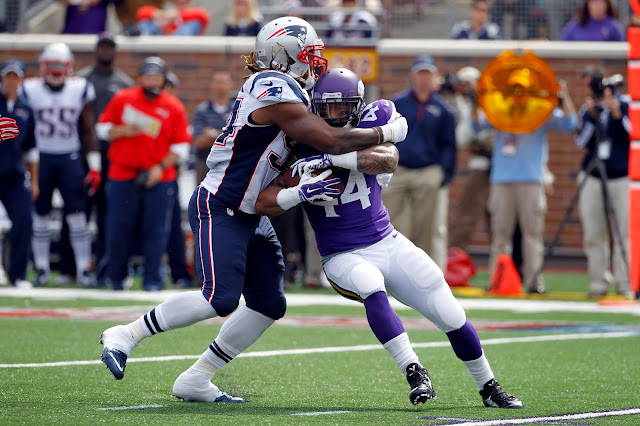 The Patriots play the Minnesota Vikings this week and while the Vikings may not be a huge threat as a team, but the Patriots have a lot riding on winning, to gain home field advantage throughout the playoffs. The Patriots are currently one game behind the Chiefs and considering the recent events with Kareem Hunt, the Pats are sitting pretty to gain the first seed.

The Vikings play a press man to man defense with a 4-3 base. Playing a press defense is very difficult. The Patriots will want to want to use their speed to try to create space early in this routes. The Pats' receivers are also going to want to use their hands to create separation as well. Since the Vikings play a man to man scheme, the Pats can use motions to create confusion. The Patriots can also get creative with James White by using motion.

The Vikings' defense averages 314.7 yards per game. They allow 221.1 passing yards and 93.6 rushing yards, ranking them as the third best defense statistically. After last week its very clear that the Patriots offense revolves around Sony Michel. When he runs well, it opens the Patriots offense up. Considering its man to man, the Patriots can run quick routes and create plays that favor their mismatches. For example, Gronk on a vertical pattern, clearing the linebacker, Gordon could run in the hole that Gronk creates, Edelman could run an out route or a slant and White can run a route in the flat.

The Vikings have some huge weapons on the offensive side. The skill positions for the vikings are dangerous. The Patriots play man to man with some zone mixed in. The best bet for the Patriots today will be to play man to man and really focus on Stefon Diggs and Adam Thielen. Also the Pats shouldn't overlook Kirk Cousins, he is underrated.

The Pats should win today. I think they get two turnovers, along with Gronk getting a TD, Gordon getting a TD and Sony Michel getting two TDs. The Pats win today 35-14.