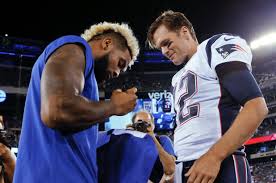 The wide receiver position as been an unstable one for the Patriots for past couple years, with the team trying to tighten up with the trades for Patterson and Gordon. However, according to Pro Football Talks Chris Simms, they had something even bigger in mind.

I never really believed the trade talks when they first started, because Beckham hasn't really fit the mold for a "Patriot receiver". He will carry a lot of media presence and a hefty contract, but man would he be a serious weapon. We saw what Josh Gordon put up in only 11 games, so a full season with Odell would certainly be fun to watch. There still are rumored reports that the Giants are willing to move on from Beckham before his contract is up, so there still is a possibility that Bill swings the trade.

Beckham has been tight with Tom Brady in the past as both share some love back and forth on Instagram. If it's possible down the road, I would 100% be on board with the move.