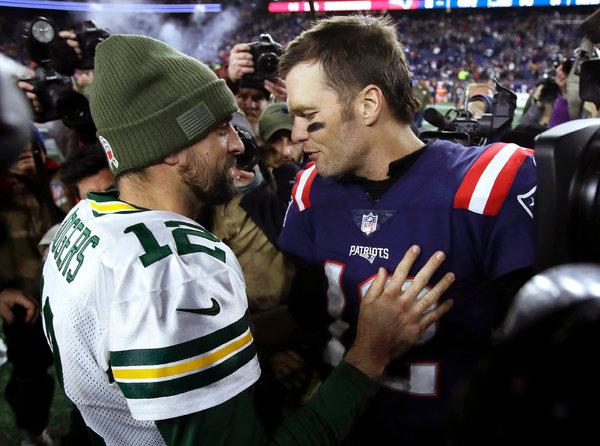 The success of Aaron Rodgers and Tom Brady have often been compared over the years, but in a recent post by Bleacher Report, many ex-teammates have come out against Rodgers. Words like "sensitive", "entitled" and "petty" were used against him, and former receiver Greg Jennings even went as far as to call him an "ultrasensitive source of toxicity.”

While those sure do sound like some fun compliments, the article went on to compare the leadership abilities between Rodgers and Brady. "He (Jennings) could tell Packers receivers were scared just to say hello with Rodgers likely hyperanalyzing their every move from afar. To him, that’s sad. It shouldn’t be like this. He sees the relationship Brady has cultivated with Julian Edelman, with all of his receivers, and says, ‘Everyone wants that.’ Those two spend time together off the field, and it carries into what matters on the field. Brady builds bonds for life, and that can be the difference between division titles and Super Bowls.”

While Rodgers will undoubtedly have his spot in the hall of fame and has some better stats than Brady, his one Super Bowl compared to Brady's six will always hold him back. Now especially after the release of this article, it became clear why Rodgers, while physically better than Brady, struggles to go the distance.

It has always been a point in Brady's legacy to make good relationships with his receivers, and this has carried onto the field as well. He is no stranger to holding back his emotions and frustrations with his teammates, but will never give up on them. This really shows the difference in leadership abilities and why Brady has a far better career track record then Rodgers.