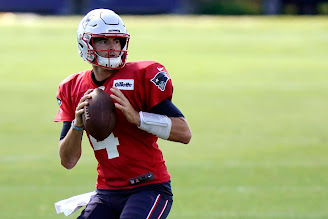 Patriots’ QB Jarrett Stidham was taken to a local hospital on Thursday for precautionary tests on his upper leg that came back negative, per league sources. Stidham returned to the team this morning and went through practice Friday, though with a lighter load than usual.

We're glad the news and diagnosis is all clear. But certainly a scare for the quarterback this early in training camp.

Stidham has been battling with both other quarterbacks on the roster during the early days of training camp. He has not looked good, and this short stint sitting out will surely set him back as well.

Hoping for a speedy recovery from Stiddy.