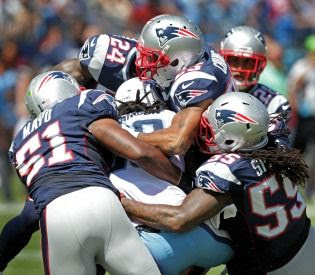 Whenever I think New England Patriots, I just can't stop thinking about Dont'a Hightower, Jerod Mayo and Brandon Spikes. These are guys who are just going to make plays week in week out. The three of them combined for 14 tackles individually, and held Chris Johnson, who many had down for a comeback year, for just four yards. I repeat that - FOUR yards. This was still a 1,000 yard runner last year, and the defense held him for four yards.

Helped of course by the defensive line. Vince Wilfork was once again the monster he always is. He's so under-rated by the rest of the league, but not by us Pats. As I wrote about in June, Jermaine Cunningham has stepped up all preseason and against the Tennessee Titans on Sunday. I think enough's been written about Chandler Jones this week, but not enough about Rob Ninkovich, who has moved from OLB to DE this summer, and has performed very well there on Sunday.

I really like the safety combination of Steve Gregory and Patrick Chung. If Chung can stay healthy, he is a great player who hits hard, and Gregory looks a nice pick up in Free Agency. The starting corners Devin McCourty and Kyle Arrington are both ball hawks who have both had 7-INT seasons recently (McCourty in '10, Arrington '11), who didn't look too bad in the opener, but are both still young and can improve.

Not to get too ahead of myself, but I decided to have a look at the defense we put out against the Pittsburgh Steelers in the AFC Championship game in the 2004 season. Ty Law didn't play the game, as he was on IR, but he would have been a starter. 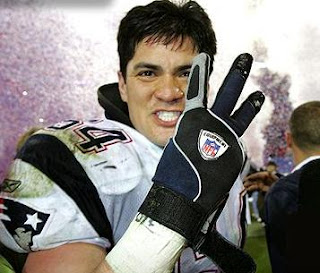 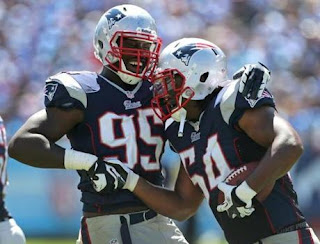 
Is it possible to compare them? Not yet. But I do firmly believe Mayo, Hightower and Spikes are the next Bruschi, Vrabel and McGinest. Bill Belichick has pulled off some draft day genius with Jones and Hightower in the first round, Jones can be as good, if not better than Seymour. Chung has the tenacity of a Harrison, but I believe that he, along with the rest of the secondary, have a lot of progressing to do if they want to match the dynasty defense. But if this defense can keep up with the progression it's making, match to an offense which is a lot more explosive than the ones from the early '00's, and this team has all the ingredient s to match the hardware that great defense won.